With the weather cooling down, I’ve found myself curling up and reading more often these days. To me, there’s nothing better than curling up with my favorite blanket and a good book to end a hectic day. It’s one of my favorite ways to unwind. Anyways, it’s been a while since my last book review, so today I wanted to share some books I’ve read over the last few months! I brought my kindle with me to France & Italy so I could have plenty of books to read without having to lug them everywhere…while I love the feel of holding a physical book, the Kindle paperwhite is great for on-the-go! 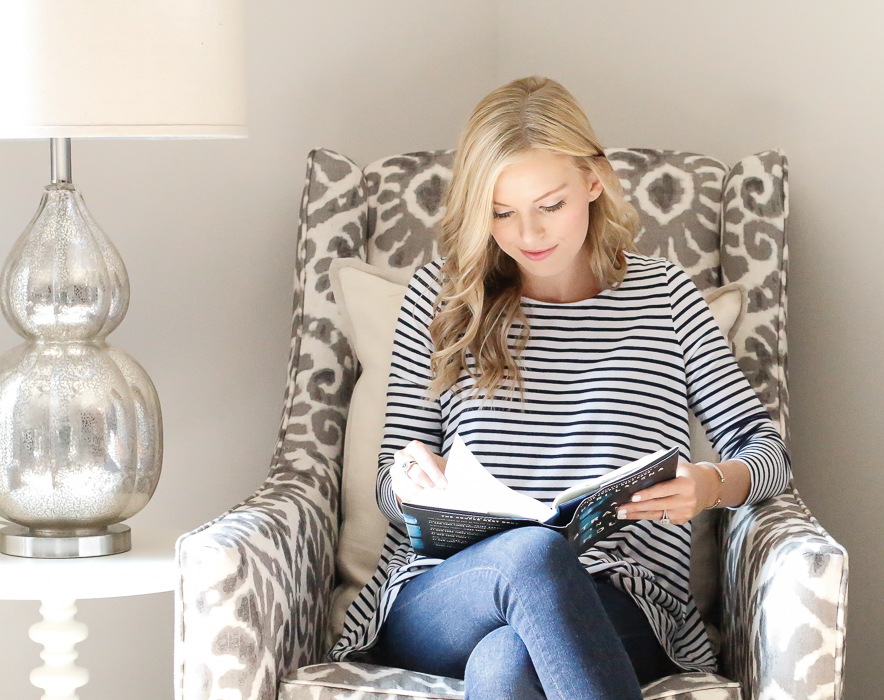 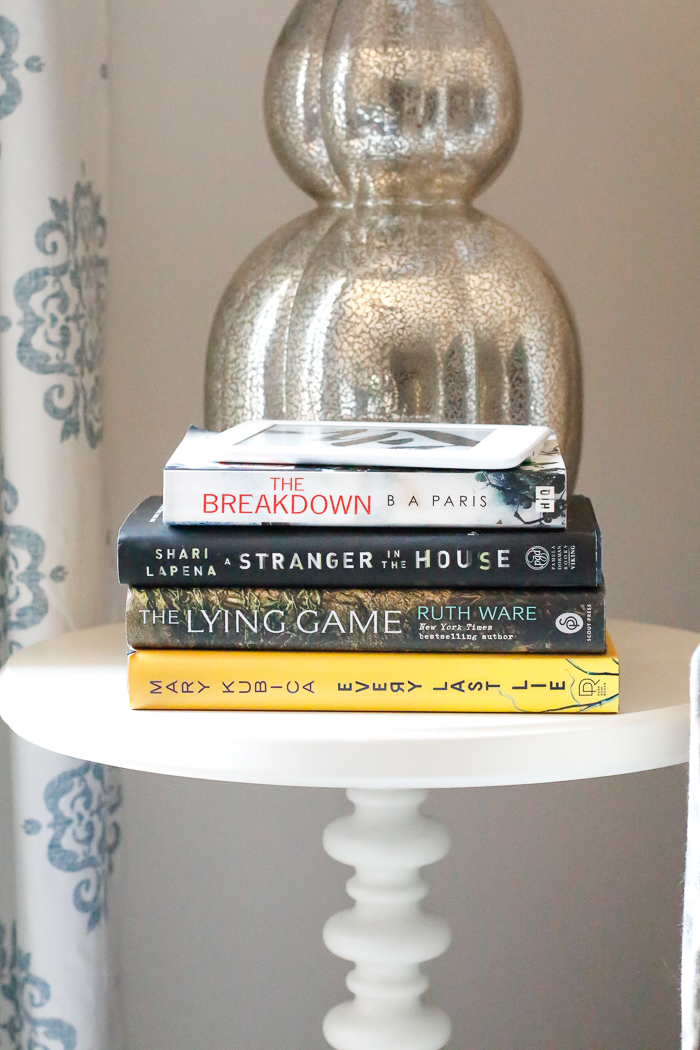 THE BREAKDOWN BY B.A. PARIS | After reading Behind Closed Doors by B.A. Paris (and loving it!), I immediately bought this book. This book sucked me in from the beginning. In the book, Cass is heading home late one night on a winding road in the pouring rain when she comes up on a car that is stopped in the road with a woman in it. After looking to see if she needs help, she decides to carry on towards home. The next morning she’s alerted that the woman was found dead. As if that’s not traumatic enough (talk about feeling guilty for not helping her out) strange things start happening. Strange phone calls come in, she begins to forget things, and she becomes incredibly paranoid of the situation. This book had me turning the pages so fast trying to get to the bottom of who killed Jane!

A STRANGER IN THE HOUSE BY SHARI LAPENA | This is another book that I bought based on reading a previous book by the author. In A Stranger in the House, Tom and Karen have a seemingly perfect life. That is until one day she’s in an accident and doesn’t remember anything that happened. As she’s recovering she begins noticing things aren’t quite right. Things are being moved and going missing but she can’t quite figure it out. I don’t want to say much more because I don’t want to spoil it, but this book was a serious page turner and I didn’t see the end coming! This book is written by the same author as The Couple Next Door.

THE LYING GAME BY RUTH WARE | This book is about four friends who are bound together by lies. What started out as a game has turned into much, much more. The rules of the game: Tell a lie. Stick to your story. Don’t get caught. Never lie to each other. Know when to stop lying. Years or friendship and years of lies, the four girls have held these lies deep inside for many years, until one day their lies begin to catch up with them. As their stories start to unravel, they have to get together to do damage control. It’s then that each one of them starts to realize they’ve been lied to all along. For me, this book wasn’t great. Written by the author of The Woman in Cabin 10, I had high hopes for this one but it was just really slow. I wouldn’t consider it a thriller or even really that suspenseful.

EVERY LAST LIE BY MARY KUBICA | Imagine losing your husband in a tragic car accident. As if that isn’t bad enough for Clara, things happen that lead her to believe the accident wasn’t an “accident” after all.  The book explores alternating perspectives as Clara is investigating and grieving over her husband’s death and Nick’s perspective from the last few months before his death. I always love when books tell things from different points of view because it allows the story to unfold in two different ways and it makes it that much more suspenseful. I really liked this book and the storyline it took. 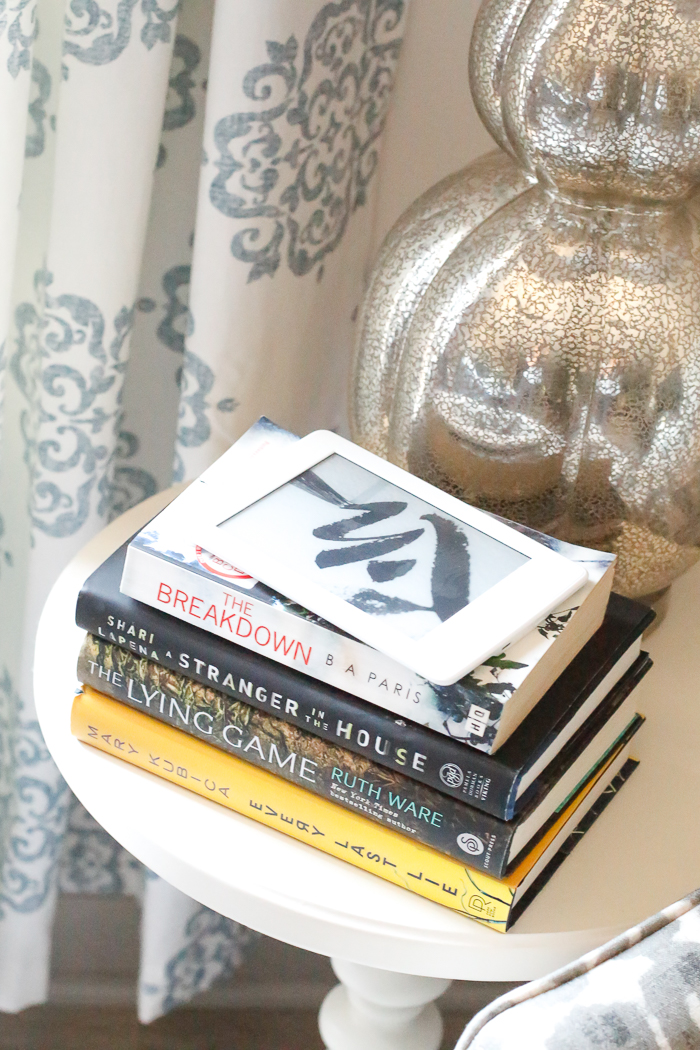 THE IDENTICALS BY ELIN HILDERBRAND | I am a total Elin Hilderbrand fan, especially in the summer months when I’m looking for a good easy read. Twin sisters, Tabitha and Harper, have been at odds for years. They’ve spent most of their life proving how different they are in all aspects of life, despite being identical twins. A family crisis forces them to get together and makes them hash out their differences and resentments toward each other. In the end, it makes both sisters realize that no fight or resentment is more important than the bond they share. If I’m being honest, this was not my favorite book of hers. I read it while I was in France and it took me a while to get into it, which is typically not the case for her books. I would still recommend it, but it just didn’t captivate me like most of her other books do!

BETRAYAL BY FERN MICHAEL | I haven’t read a lot of this author, but it’s safe to say I’ll be reading more of her now after reading this book. Kate and Alex have a good life and a seemingly perfect marriage. This all changes one day when Alex receives a phone call that will change the course of their life. Alex has been accused of an unspeakable act (don’t want to spoil it!) by one of their best friends. Alex is sent to jail and Kate is left with grief, unanswered questions, and a lot of anger. Kate is determined to get to the bottom of the situation, no matter what it takes. I read this book in 24 hours while we were in Europe. Our family friend read it, then my mom read it, and after hearing them rave about it, I had to read it!  We all read it within 24 hours because it is SO good! I highly recommend this book.

THE PERFECT STRANGER BY MEGAN MIRANDA | Leah needs to start over in a new city, so when she runs into an old friend, Emmy, they decide to start over together. Not long after their move to a new city, a woman is found dead in a lake…and the woman resembles Emmy. As police try to help Leah find her friend, she realizes she may not know Emmy like she thought she did. In fact, she may not know Emmy at all. Twists and turns in this storyline keep you turning the page to try to figure it out! Overall I thought this book was a good read. It is more suspenseful than thrilling and then ending wasn’t my favorite but I did enjoy it!

INTO THE WATER BY PAULA HAWKINS | The Drowning Pool, as it’s come to be known, flows through the town where Nel and her daughter live. The name sounds eery, but for good reason, because many women have gone missing there for years…which left a lot of questions and rumors circulating about town. When Nel goes missing, Nel’s sister Jules and Nel’s daughter think there’s more to the story and they’re willing to do whatever it takes to find out. This book is written by the same author as Girl on the Train, so I was very excited to give this book a read! Unfortunately, it fell flat. I ended up starting this book on three separate occasions and because I’m a total book nerd I couldn’t not finish it. There were a lot of characters and not a lot of character development, so I was left with a lot of questions and confusion as I read the book. It was hard to remember who was who! 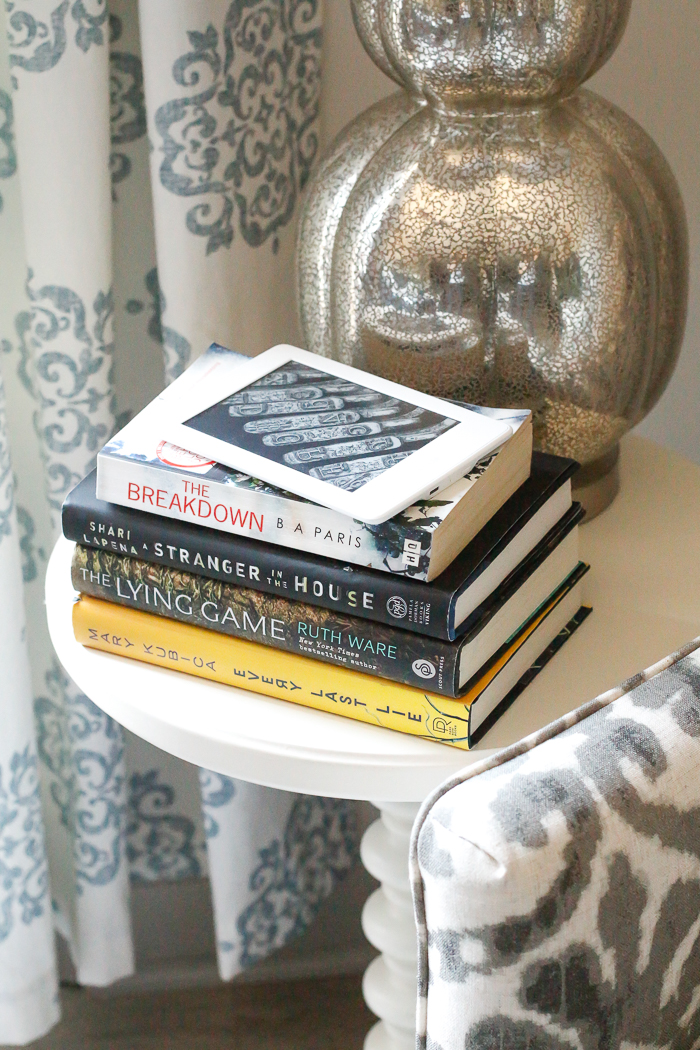