Yesterday morning we woke up to a winter wonderland! Well, what we consider a winter wonderland in the south haha! We were snowed in all day long & the snow day had me wanting to curl up and read a good book! Today I wanted to share the books I’ve read recently. I’ve picked up some really good ones lately that I haven’t been able to put down! If you have any good book recs, let me know in the comments! 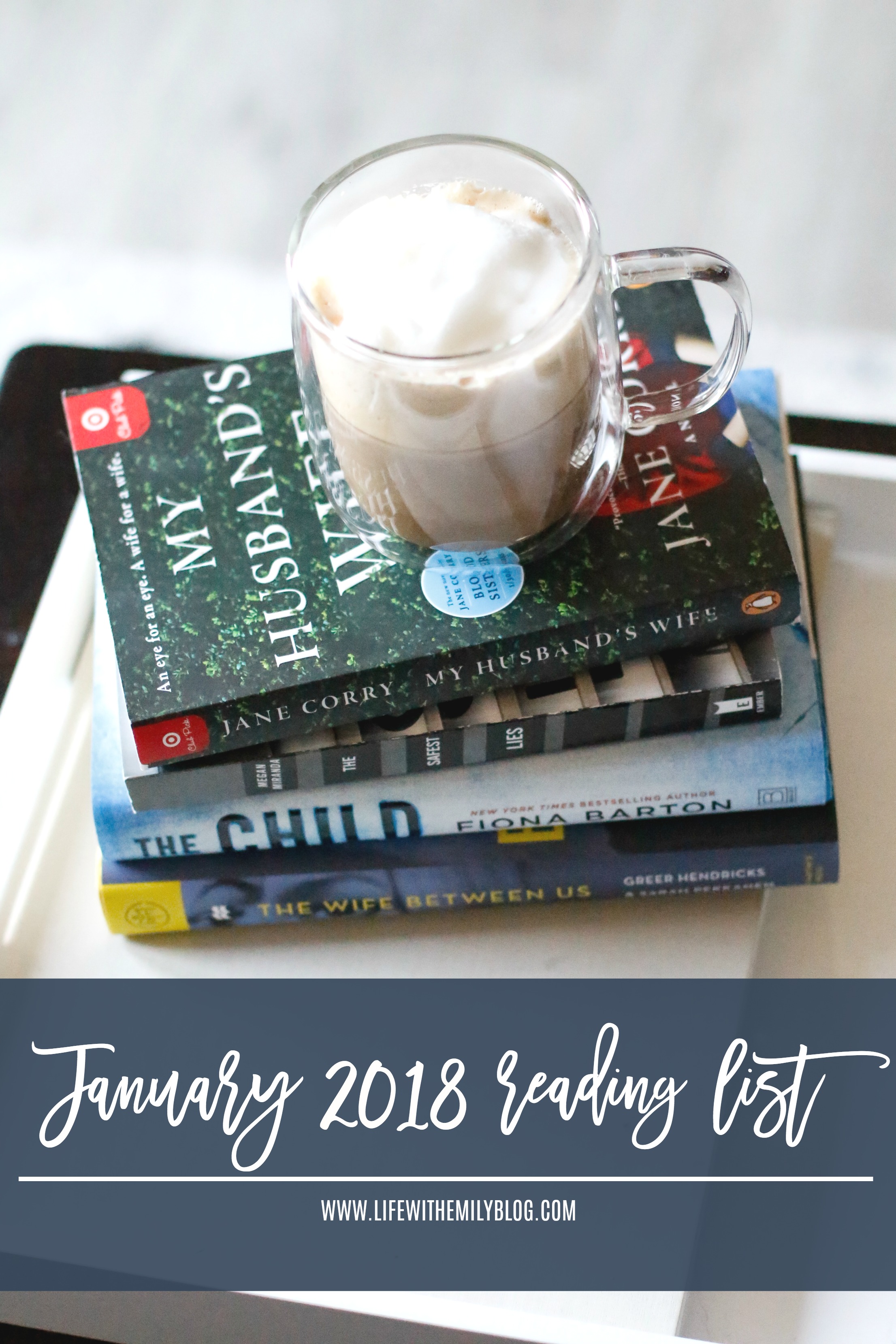 Every month I try to make time for at least a few books. Some months I am able to read more than others. I have been loving suspense/thriller books for the last few months, but I read a few other genres this month as well! I always love the feel of reading a physical book, but sometimes I’ll read on my Kindle Paperwhite because the deals on e-books are SO good! 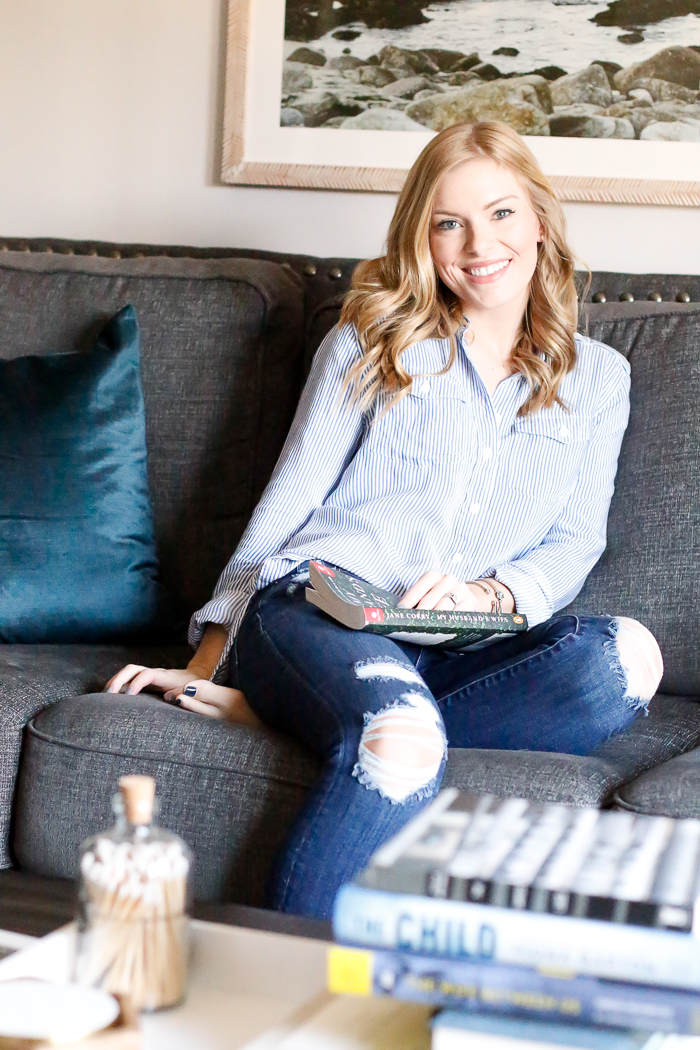 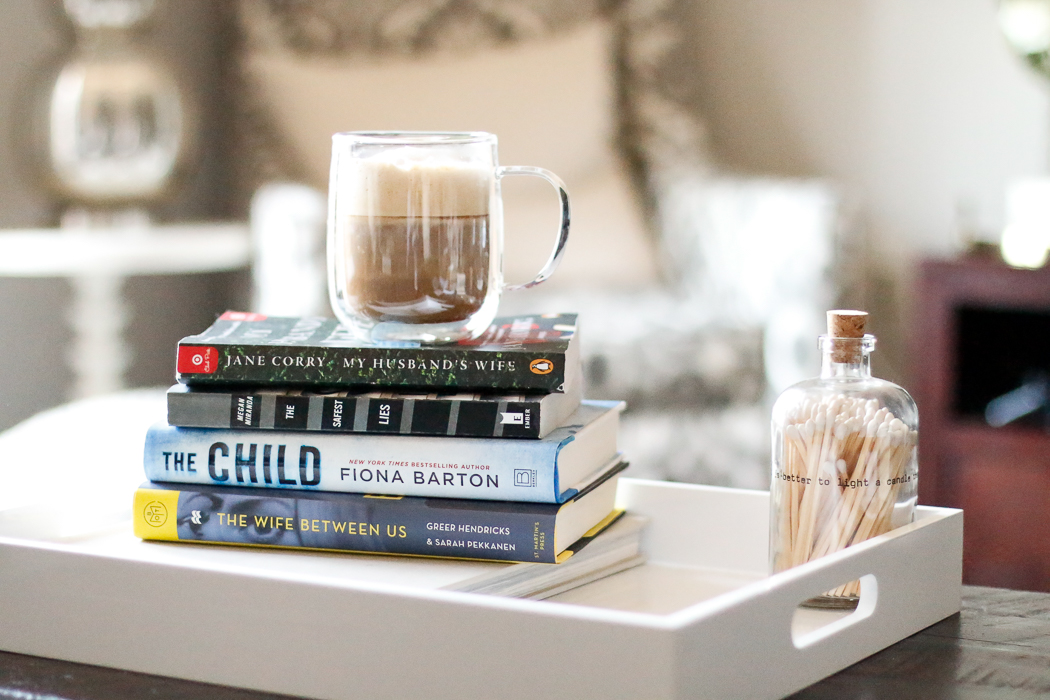 MY HUSBAND’S WIFE BY JANE CORRY | Lily marries Ed, in hopes of starting fresh even though it’s only been a few months. As a new lawyer, Lily takes on her first murder case and finds herself strangely drawn to her client, a convicted murderer named Joe. As Lily gets tangled in a web with Joe, Lily and Eds marriage quickly diminishes. Meanwhile, next door Francesca and her daughter Carla have secrets of their own. Carla quickly becomes entangled in Ed and Lily’s life…and 15 years later it still haunts them. This book was definitely suspenseful and kept me following along throughout the whole book! Some parts were a bit predictable, but overall it was a good read!

THE SAFEST LIES BY MEGAN MIRANDA | Kelsey has lives most of her life in fear, with a mother who hasn’t stepped foot outside of their home in seventeen years since her mother escaped her kidnappers. Kelsey has learned to keep a low profile and has succeeded…that is until she drives off of a cliff and her classmate, Ryan, is the one to save her. After that traumatic event, Kelsey arrives home a few days later to find her mother missing…and they’re coming for her too. I was excited to read this book because I have loved Megan miranda’s other books, but to be honest it fell a little short. It was more of a YA novel (not that I mind them from time to time) and it felt a little juvenile. There were definitely parts that kept me in suspense, but it wasn’t my favorite recent read.

THE CHILD BY FIONA BARTION | If you liked her previous book The Widow, then you should definitely pick up this book! After an older housing development is demolished in London, a baby’s skeleton is found among the site. Kate Waters, a local journalist, is put on the job to unearth who the baby is and what happened decades earlier. The story is told from the perspective of four different women, all intertwined in different ways to this baby. It was a pretty good murder mystery and the ending really surprised me.

THE GIRL FROM THE TRAIN BY IRMA JOUBERT | World War II novels always pique my interest, so I couldn’t wait to start this book. And I definitely couldn’t put it down. Six year old Gretl Schmidt is on a train headed to Aushwitz. Meanwhile, Jakob Kowalski has plans to blow up a train as he’s fighting Polish resistance against Germany & Russia. Gretl’s train is unscheduled and gets to the tracks first, leaving everyone on the train dead except for Gretl. Jakob finds Gretl and his guilt takes over as he promises to care for her and hold her secrets. But nothing can last forever and Jakob has to send Gretl to South Africa where orphans are promised a fresh start & a bright future. As you journey through the fields of Poland in 1944 to the orphanage in Germany, then on to South Africa in 1956, you truly feel Gretl’s fears and ambitions as she’s sacrificing the life she knows and the ones she loves. This book gave me all the feels as her story continued to unfold.

THE WIFE BETWEEN US BY GREER HENDRICKS & SARAH PEKKANEN | I got this book in my Book of the Month box (more on that below) and it was SO good! This book is a total psychological thriller and it was a serious page turner. I really don’t want to give much of a synopsis on this book because you should totally go in with an open mind because the twists and turns this book takes is unreal. The plot is pretty simple–at first. A woman in love plans her wedding to the man of her dreams. And she’s not going to let an unhappy ex-wife get in the way of marital bliss. But as the days go by, the bride to be finds out that even the best thought-out plans can fall apart in the blink of an eye. Nothing is as it seems to be. GO BUY THIS BOOK. I promise you won’t regret it!!! 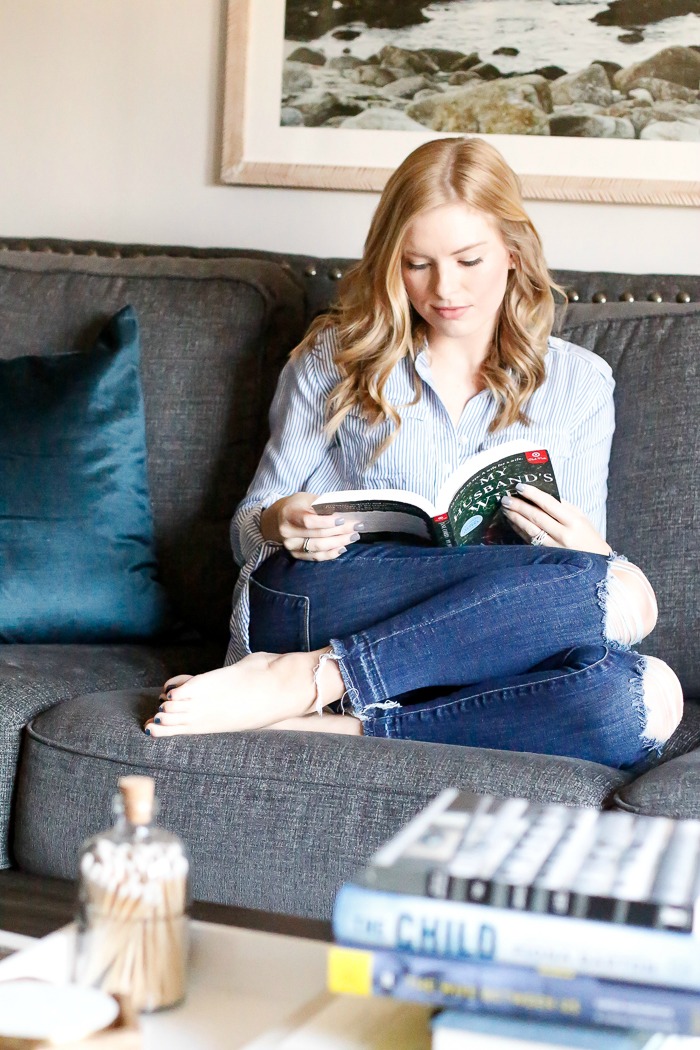 book of the month

Back in early December I discovered the Book of the Month through a book club and I just had to share It with y’all! The concept is simple, for $14.99/month you choose a book from their monthly selections. You can add any other books to your box for $9.99 each. If you don’t like the month’s selections, then you can skip the box and you won’t get charged! All of their books are hardbacks, which is a *really* good deal because most hardbacks are $24+.

Since joining back in December I have discovered SO many good books, including The Wife Between Us (it was a BOTM exclusive before it hit bookstores!) The January selections were really intriguing and I ended up ordering two, plus a book I had been wanted to read for a while!

*And no, this isn’t sponsored at all! I just wanted to share an awesome book subscription box that I found (and pay for myself!) with my fellow book loving friends! 🙂

SIGN UP FOR BOOK OF THE MONTH HERE | MY JANUARY BOOK SELECTIONS: TWO GIRLS DOWN BY LOUISA LUNA, THE WOMAN IN THE WINDOW BY A.J. FINN, and my “extra” book THE SEVEN HUSBANDS OF EVELYN HUGO BY TAYLOR JENKINS REID 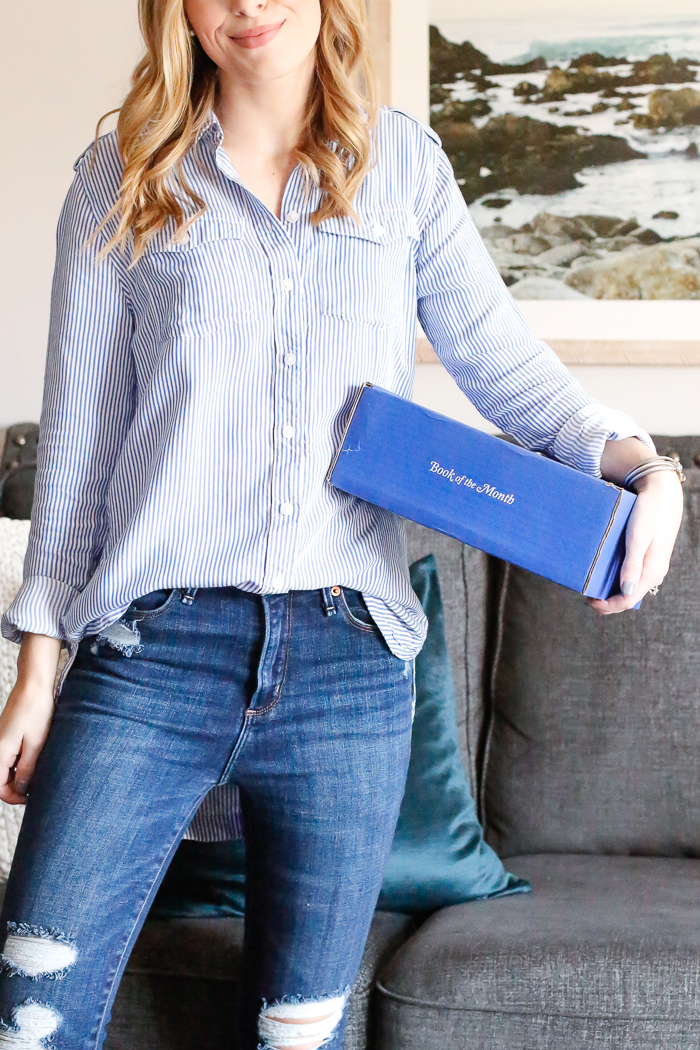 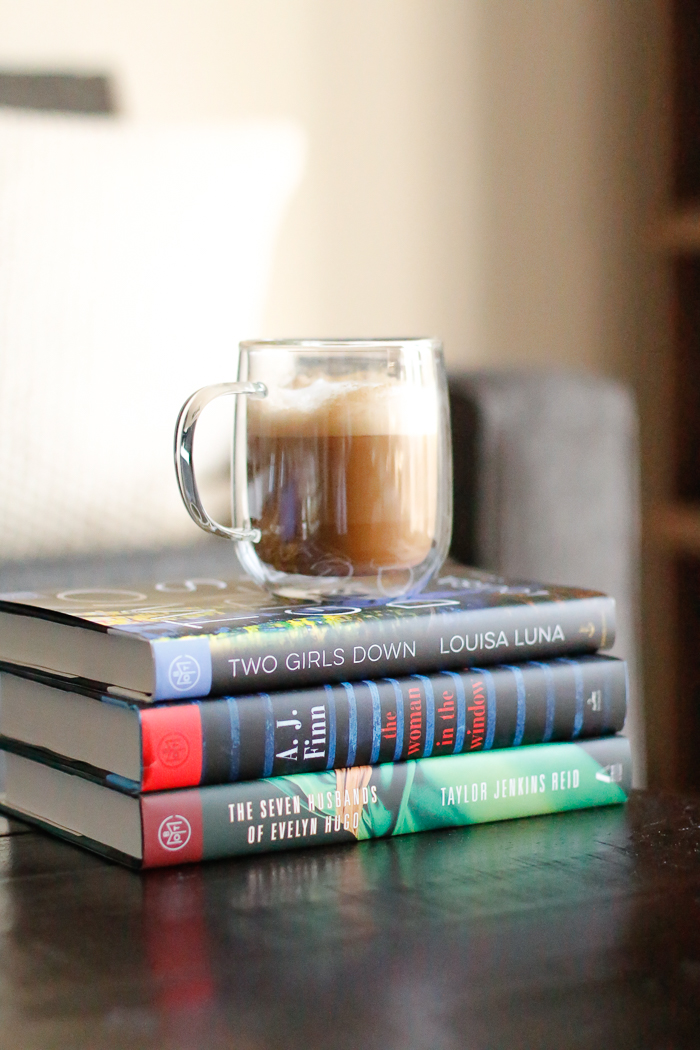 Thanks so much for stopping by! XO

Shop Platforms, Pullover Hoodie, Slip On Sneakers, Boots and more. Get this widget.