This month I was able to read seven books! Between snow days and sick days, I got my fair share of reading in this month! I read a lot on my Kindle Paperwhite this month (thanks to Goodreads e-book deals!) and grabbed quite a few good books from Book of the Month. I joined BOTM back in December and have been introduced to so many great authors and books since then. If you’re a fellow nerd like me, it’s totally worth signing up! Anyways, there were a lot of good page turners this month that I think y’all will really enjoy.

As always, I would love to hear what you’re reading! While my bookshelf is overflowing right now, I am always looking to add good books to my list! I hope y’all have a great weekend! Thanks so much for stopping by! XO 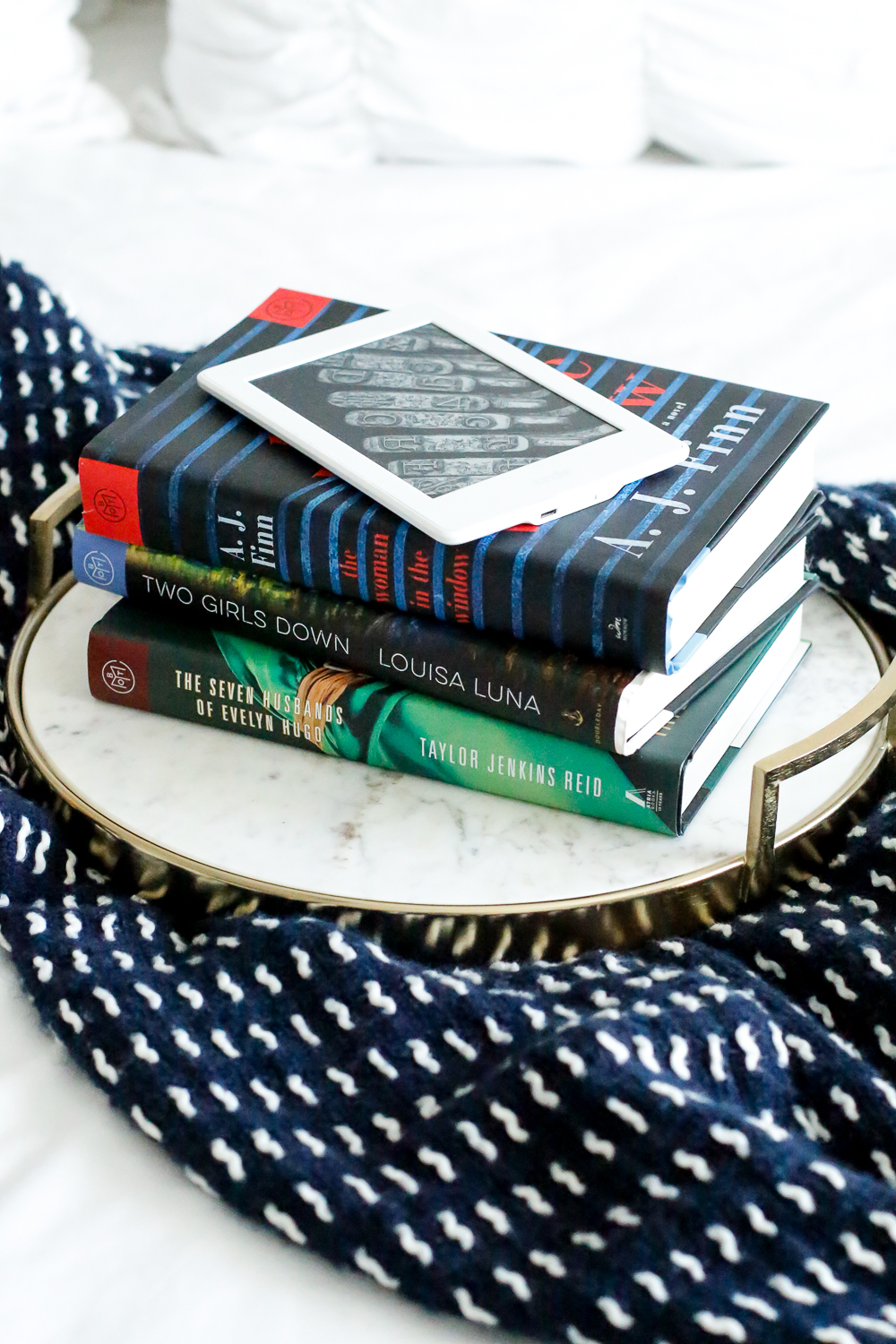 THE SEVEN HUSBANDS OF EVELYN HUGO BY TAYLOR JENKINS REID | Famous actress, Evelyn Hugo, has lead a scandalous and glamorous life. Her name has been in the headlines since the 50s, but like every story, there’s often more than meets the eye. And now Evelyn is ready to talk. Evelyn Hugo hand chooses Monique Grant as the journalist to write her story. At the time Monique isn’t sure why she was chosen, but as Evelyn’s story unfolds secrets come out and it becomes clear exactly why Evelyn chose her. This was the first book I’ve read by TJR (I think!) and I love her writing style. I really enjoyed the way the story unfolded and I think this story really does a great job of sharing “behind the scenes” of celebrities lives! I will definitely be reading more by Taylor Jenkins Reid!

THE WOMAN IN THE WINDOW BY A.J. FINN | I chose this as one of my Book of the Month picks and I’m so glad I did. This book has already gotten rave reviews and it’s said to be the next Gone Girl and after reading it I can understand why. Anna Fox lives alone and hasn’t left her home in over a year. Her days consist of drinking too much, watching old movies and spying on her neighbors. This combo proves to be an issue when new neighbors move in and she sees something awful happen. Or so she thinks. She’s not sure what is real and what is made up and everything is stacked against her. This book was definitely a page turner and I never saw what was coming!

TWO GIRLS DOWN BY LOUISA LANE | Two girls go missing in a strip mall and their mother hires a bounty hunter, Alice Vega,  to assist in finding them. The small town police department isn’t privy to the idea of having Vega helping, so she enlists the help of a former cop to get to the bottom of this case. There’s little to go on, and plenty of lies strewn about but they work together to get to the bottom of the kidnapping and to find the girls. This was my second select from Book of the Month and I’ll admit it, I didn’t like it as much as I thought I would. My first complaint is how long the chapters were. I know, I know it’s sort of nit-picky but when I always like to read a full chapter (or more) at a time and sometimes the chapters were 30+ pages. The ending was great, but it wasn’t as much of a page turner as I thought it would be. 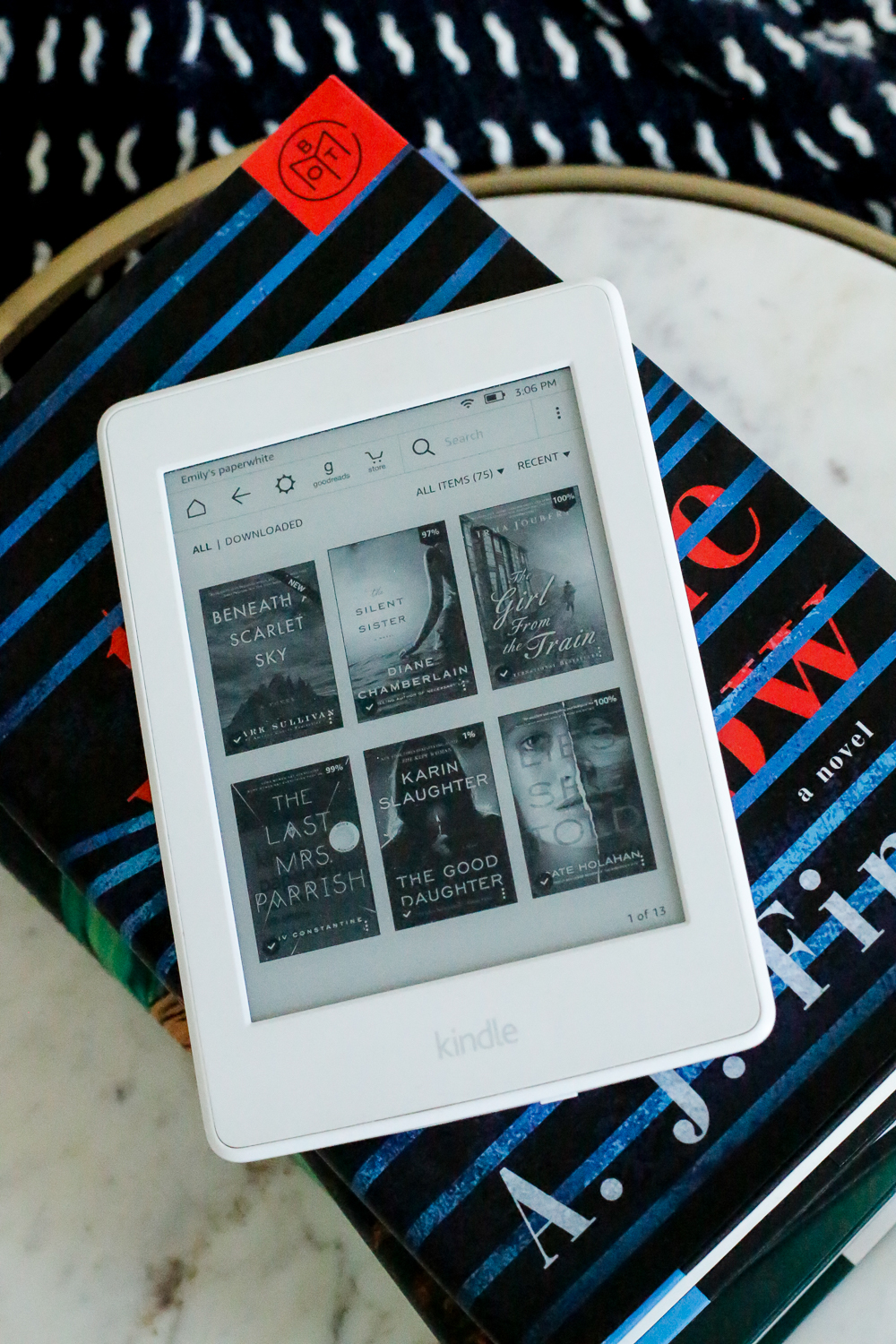 THE SILENT SISTER BY DIANE CHAMBERLAIN | The MacPherson family was rocked by tragedy when their daughter Lisa commits suicide after something horrible happens. Lisa’s sister, Riley, has spent her entire life wondering about her sister. After her father passes away, she finds evidence that may mean Lisa is alive and Riley is determined to find out the truth. Along the way Riley is forced to confront everything from the past as she questions her family and her future. I absolutely LOVED this book. It was a page-turner and it kept the twists and turns coming. I always like when I can’t figure out the plot, so this book certainly kept me guessing.

LIES SHE TOLD BY CATE HOLAHAN | Liza has thirty days to write a thriller that will land her back on the best seller list. She’s stressed about that along with things in her personal life, like trying to start a family with her husband and their friend, Nick, who is missing. As Liza begins to write, she finds herself using part of her life as a premise for her book. But then the lines begin blurring between fiction and reality and things become a little too true for her liking. I thought this book was pretty good- the story line was good – but I had a hard time keeping Liza and her fiction character, Beth,  separate. The book she’s writing is so similar to her life that it was hard to keep track of what was real and what wasn’t! If you go into it knowing that- then you’ll really enjoy it.

THE LAST MRS. PARRISH BY LIV CONSTANTINE | This book was really similar to The Wife Between Us (that I reviewed last month) but it was still enjoyable! Amber Patterson is a woman who constantly blends into the background….and she’s tired of it. She’s spent her life being envious of other’s and she’s ready for a change. And this time she has a plan. Befriending Daphne is part one of her plan. Everything seems to be going as it should, but the turns and secrets that are revealed will keep you guessing and turning the page until the very end! I thought this book was SO good! Like I said above, it was similar to another book I read recently, but with enough twists to differentiate them.

THE GOOD DAUGHTER BY KARIN SLAUGHTER | Life quickly changes for the Quinn family when they’re attacked at their home. Daughters, Charlotte and Samantha, are forced into the woods at gunpoint and one ends up running for her life while the other is left behind. Twenty-eight years have passed since that fateful night but there is still violence in Pikeville that stirs up nightmares, suppressed memories, and a truth that neither sister is ready to learn. This was another great read. I think I read it in 48 hours because I couldn’t stop reading it. It’s told from both sister’s perspectives and as each chapter goes on, you find out more about that night twenty-eight years ago.