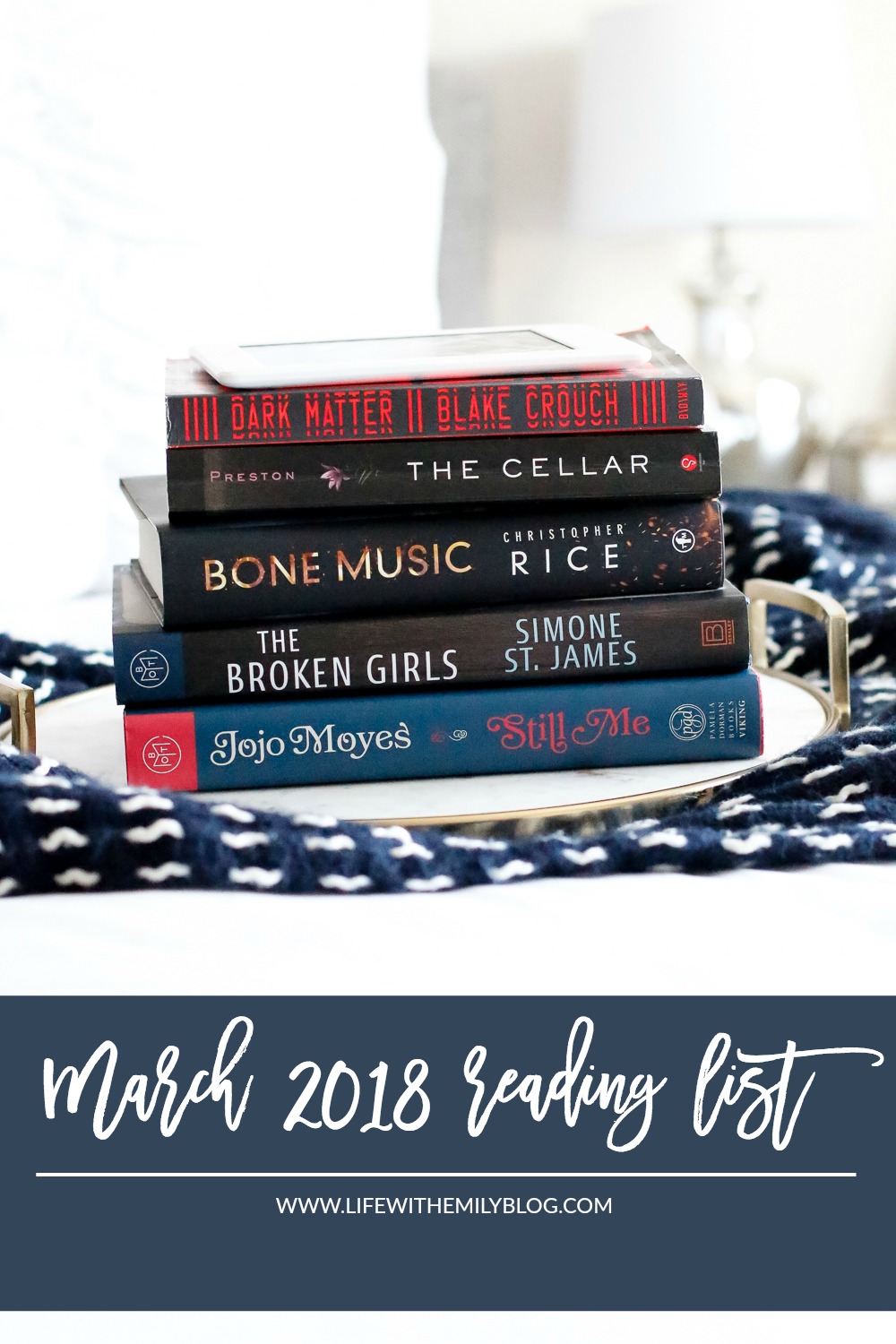 I can’t believe we’re half way through March already. This month has been pretty busy, so I haven’t been able to read  as much as I would have liked (but let’s be honest I would read from sun up to sun down if I could haha!) A few of the books I read were from my Book of the Month and a few were reader suggestions. As always, I love hearing what you all are reading, so let me know your book recommendations in the comments below! So let’s get started… 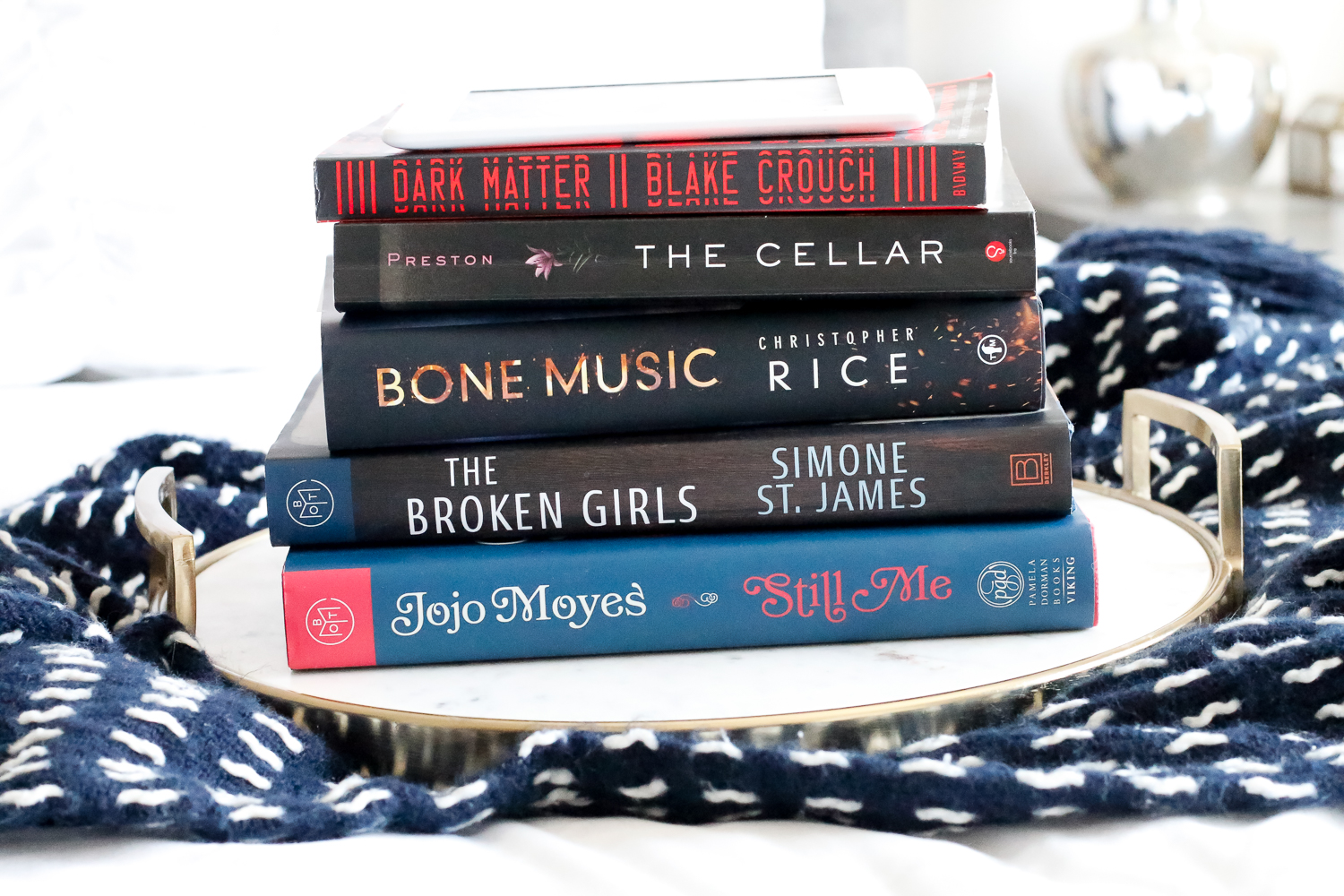 DARK MATTER BY BLAKE CROUCH | This book had been sitting on my bookshelf for the longest time and I’m so glad I got around to reading it. While I had heard a lot of hype surrounding this book I didn’t read many reviews prior to reading it and looking back I’m glad I didn’t because it would have ruined it for me. I’m going to try and review this book without giving anything away! The premise of the story is pretty simple. Can you answer the question “Are you happy with your life?” Jason Dessen finds out if he’s truly happy with his life after he’s abducted and wakes up in a life that isn’t his. Have you ever wondered what your life would have been like if you chose another career path? If you didn’t put your family first? If you went left instead of right? Jason explores all of those questions as he explores this life that isn’t his. Dark Matter is truly thought-provoking and the premise of the book totally drew me in from the get go. Admittedly, some of the science in the book lost me, but overall it was such a good book that left me thinking for days on end.

THE CELLAR BY NATASHA PRESTON | The disappearance of 16-year old Summer Robinson quickly stirs the sleepy little town of Long Thorpe. Summer, or “Lily” as she is known through most of the book, is kidnapped by a man and held in his cellar with three other girls, who are also named after flowers. The story details their time held hostage in the cellar. The description of the book had me really excited to read it, but unfortunately it fell short. The author didn’t really develop any of the characters and as I continued to read it there were so many unanswered questions because of that. The writing itself was poor and she wasn’t consistent with the format of paragraphs and dates when going from past to present. Overall, the book had potential, but it felt like all thriller cliches were put into one book. Bottom line: I wouldn’t recommend it! 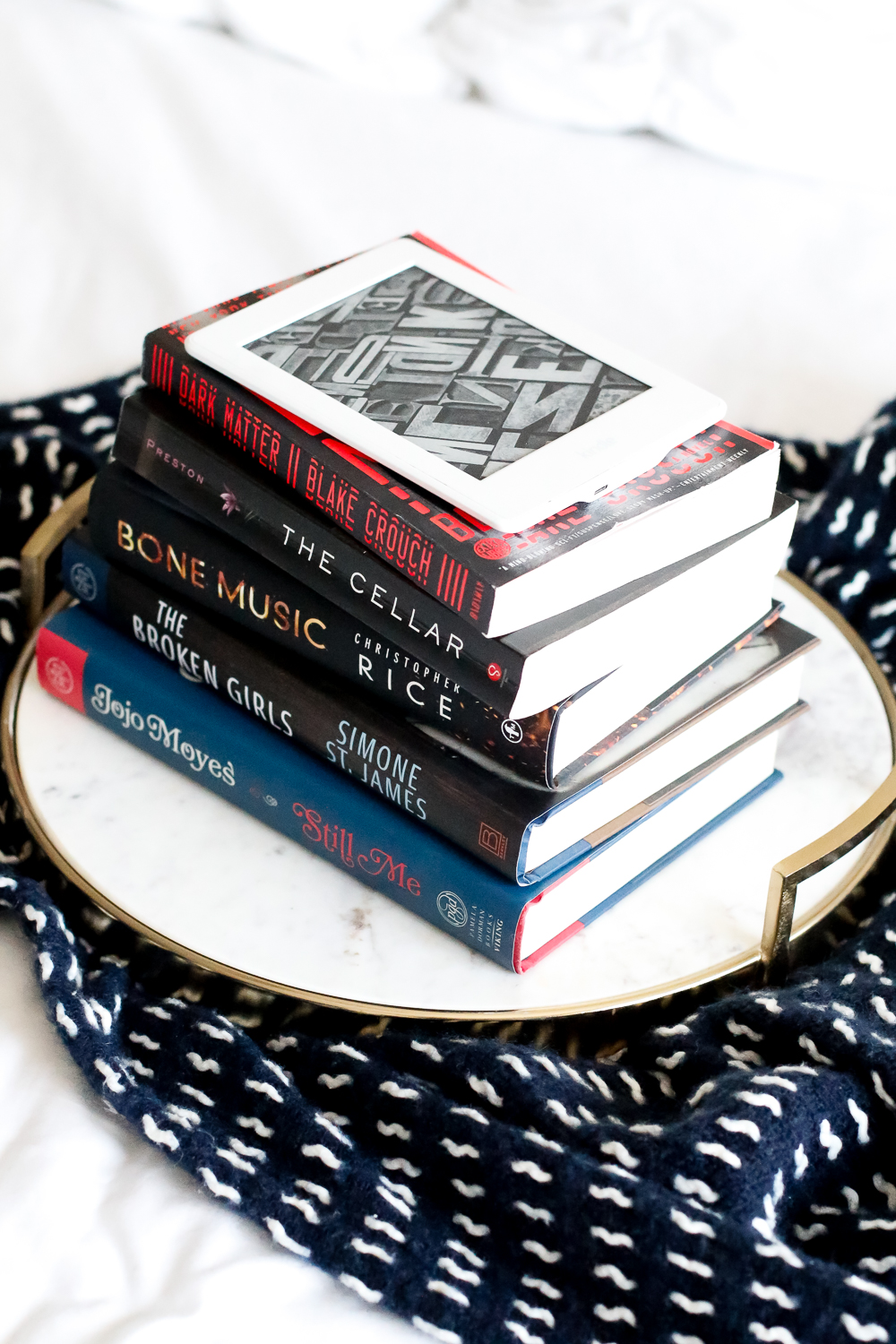 BONE MUSIC BY CHRISTOPHER RICE | This story follows Trina Pierce, who is kidnapped as an infant after serial killers murder her mother. The serial killers raise her as their own for seven years, until they are caught and she’s returned to her biological father. Unfortunately, her father has motives of his own and sells her story to the media and who label her as the “Burning Girl.” Trina decides to change her name and distance herself from the past and from there the story really gets good. Now living under the alias Charlotte Rowe, she begins visiting a therapist to address issues from her past and that leads to a whole new world of problems after he prescribes a new drug for her anxiety. I don’t want to give too much away, but this complex story line really drew me in from the very start and overall I really liked this book. I always appreciate when thrillers have short chapters because it makes it a fast paced, yet easy read! 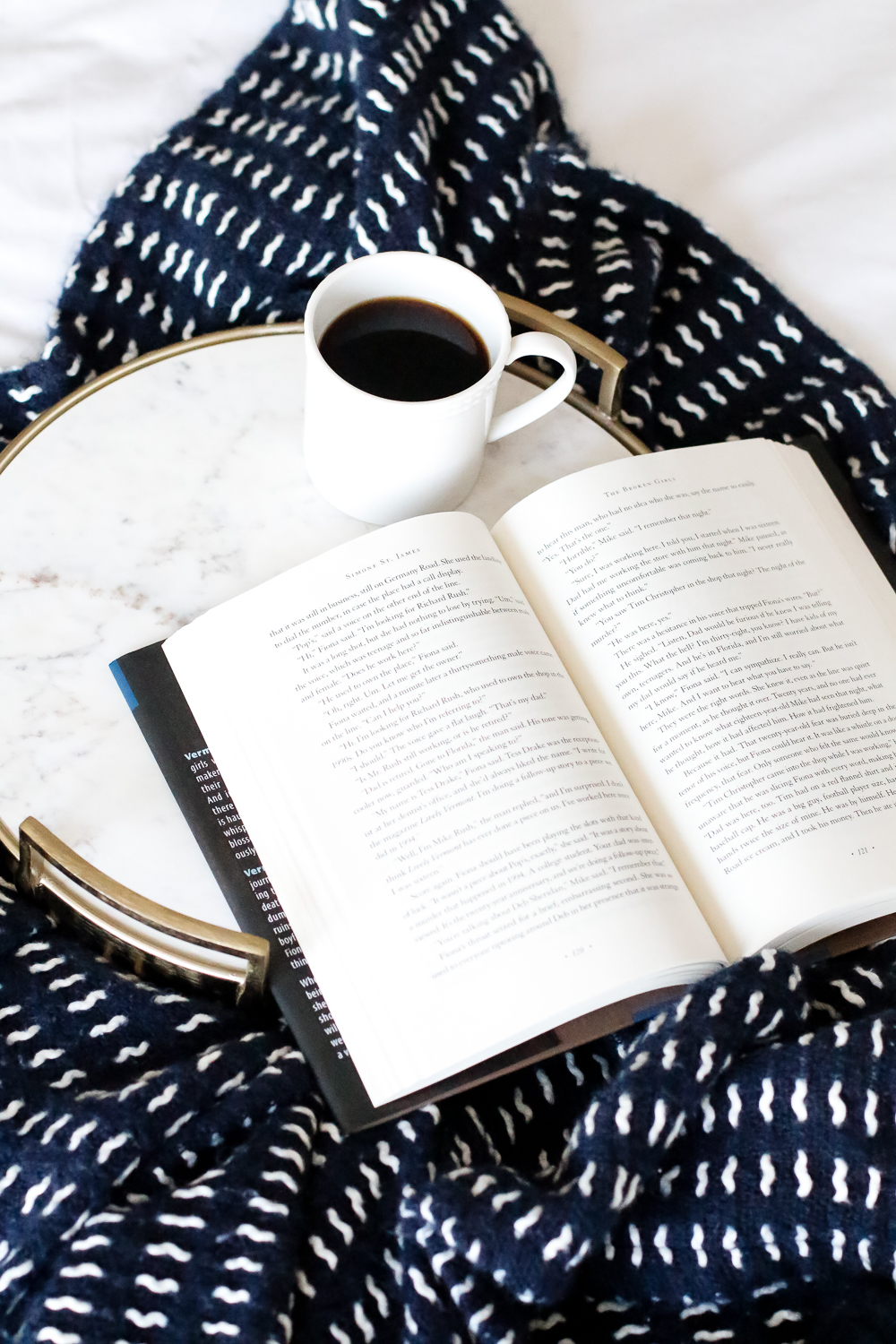 THE BROKEN GIRLS BY SIMONE ST. JAMES | I have discovered so many great books and authors since joining Book of the Month last year and this is one of them! When journalist Fiona Sheridan begins digging into her sister’s murder from twenty years earlier her research uncovers more deaths and secrets from Idlewild Hall than anyone could have ever imagined. Idlewild Hall, a boarding school in Vermont, is a place for the girls whom no one wants- including the troublemakers, the illegitimate, and those who are too smart for their own good. This story is told in two perspectives: the four girls who attended the school in the 1950s and Fiona Sheridan who is digging into Ildewild Hall in 2014. I seriously couldn’t put this book down-it was SUCH a page-turner with a few unexpected twists!

STILL ME BY JOJO MOYES | I have been rooting for Louisa Clark since she was first introduced in Me Before You! Louisa is such a quirky character and she’s been through a great deal in her life that I couldn’t help but be excited about her newest adventure to New York in the newest book by JoJo Moyes. Determined to live her life boldly, advice from the beloved Will Traynor, Louisa sets out for New York with a new job as an assistant to Agnes Gopnik and a new outlook on life. While Agnes Gopnik is vastly different from Will Traynor, Louisa still finds herself with her own set of challenges as she learns lessons and secrets that will change her life as she knows it. I love how engaging all of the characters are in this series and although nothing will ever compare to Me Before You, I still devoured this book and was still rooting for Louisa even through her missteps!

THE WEDDING DATE BY JASMINE GUILLORY | Alexa and Drew meet in an unconventional way when they find themselves stuck in an elevator together. As they begin chatting Drew reveals that he is in town for his ex-girlfriends wedding…and he’s dateless. On impulse Drew decides to ask Alexa to be his fake girlfriend for the weekend and Alexa agrees to it. What starts out as a fake relationship blossoms into a real relationship as they both learn how to maneuver long-distance dating and figuring out if they can make it last. This book was such a quick, cute & charming read! I couldn’t believe this was her debut book.

LOOK FOR ME BY LISA GARDNER | I have enjoyed every book I’ve read by Lisa Gardner, so I was thrilled to read her newest book, Look for Me. Detective D.D. Warren arrives to a horrible crime scene that was once a family home. Four of the five family members are dead and one is missing. Was it a coincidence that 16 year-old, Roxy, was away from her home at the time of the murder? Does it mean something more? Survivor-turned-avenger Flora Dane shows up on the case to find out and assist D.D. Warren in a different way. Together the odd pair work to make sense of the clues and figure out if Roxy is the suspect behind the murdered family she left behind. Lisa Gardner’s writing always draws me in from the very beginning and she does an incredible job developing the characters and the plot line. I can never predict what the outcome will be…and I certainly didn’t with this book! *This book is part of a series (which is so good!) but it’s not necessary to read the others to read this one*

I would love to hear what you’re reading right now!

I was sent Look for Me & Bone Music for possible review purposes. I will only review books I enjoyed! xx

Shop Leggings, Discover: Workout to Wherever, Fabric Care, Lingerie & Sleepwear and more. Get this widget.