Did October fly by for anyone else? It seems like I blinked and the month is nearly over! This month had a lot going on (including being without power for 3 days, ha!) so I didn’t get as much reading in as I would have liked. I have quite a list of  Book of the Month books that I need to read, so I was happy to have three crossed off my list after this month! I read five physical books, two kindle e-books, and one audiobook. My favorite book this month was The Tattooist of Auschwitz – such a GOOD read!

As always, my Amazon “Book Recommendations” Shop always has the most up-to-date books that I’m reading! I would love to hear what you’re reading – let me know in the comments! Thanks for stopping by! xx 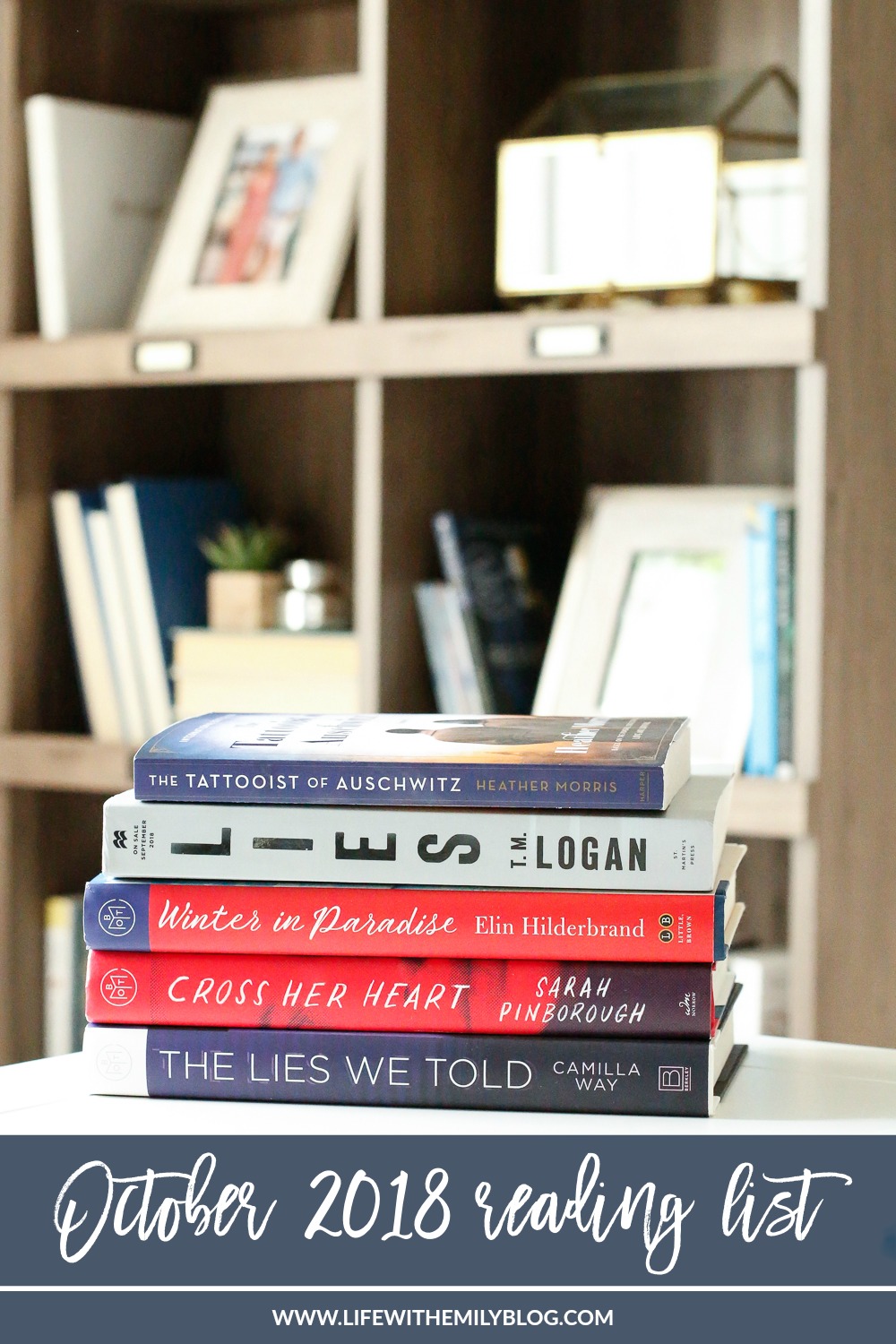 CROSS HER HEART BY SARAH PINBOROUGH | Lisa lives for her daughter Ava, her job, and her best friend Marilyn. Lisa enjoys a quiet, simple life and doesn’t let people in easily – and with good reason. Lisa has lived in fear for a long time and is constantly looking over her shoulder. So it’s problematic when her daughter rescues a boy from drowning and their photos land all over the news for everyone to see. Lisa’s world explodes, and she finds everything she has built now being threatened. Not knowing whom she can trust, it’s up to her to face her past to save what she holds dear. review: I chose this as my Book of the Month and it gripped me from the very beginning. I always appreciate when a book has short chapters (which this one did!) and is told in alternating perspectives. This book has a bit of a slow build but are a lot of twists and quite a few unreliable narrators, which always makes a suspense novel that much better! With that said, I did not like the ending. It felt a bit rushed and certainly far-fetched. If you’ve read it I would love to know what you think. rating: 3 out of 5 stars⭐️

THE TATTOOIST OF AUSCHWITZ BY HEATHER MORRIS | In 1942, Lale Sokolov, a Slovakian Jew, is forcibly transported to the concentration camps at Auschwitz-Birkenau. When his captors discover that he speaks several languages, he is put to work as a Tätowierer (the German word for tattooist), tasked with permanently marking his fellow prisoners. For the two and a half years that Lale works there, he witnesses horrific atrocities —but also incredible acts of bravery and compassion. He soon meets prisoner 34902, who he comes to know as Gita, and is determined to survive the camp in order to get to know her. A vivid, harrowing, and ultimately hopeful re-creation of Lale Sokolov’s experiences as the man who tattooed the arms of thousands of prisoners with what would become one of the most potent symbols of the Holocaust, The Tattooist of Auschwitz is also a testament to the endurance of love and humanity under the darkest possible conditions. review: I am a huge fan of historical fiction, especially when it relates to World War II. As soon as I saw this pop up on Amazon I pre-ordered it and (not so) patiently waited for it to arrive. This book is based on a true story and tore at every single one of my heart strings. It’s certainly not a “feel good” read but it’s such an incredible story that I think everyone should read. I was particularly impressed when I read the afterword & acknowledgement at the end of the book and learned more about how Lale and the author met and how the book came about with them rating: 5 out of 5 stars⭐️

TEAR ME APART BY J.T. ELLISON | When seventeen year old professional skier, Mindy, breaks her leg in a competition, a series of events unravel which will change the course of her and her family’s life forever. Specialty surgeons quickly discover she has a potentially fatal illness. Now her most important race is against time, to do what’s necessary to find a cure for her. It’s during this process that secrets and long hidden deeds are peeled back and exposed – leaving one major question: What’s the higher priority? Saving Mindy’s life, or keeping secrets hidden from everyone? review: This was the first book I had read from the author and I really enjoyed it! She does a great job of setting the scene, while keeping you guessing! When I started the book I would have never guessed that the storyline would unfold the way it did. This book had quite the web of lies and kept me flipping pages quickly until the very end. rating: 4 out of 5 stars⭐️

THE LIES WE TOLD BY CAMILLE WAY | When Clara’s boyfriend, Luke, disappears, everyone believes that he’s left her, but Clara thinks she knows the truth. Recent evidence suggests that Luke had a stalker, and Clara worries that he’s been kidnapped. Then Luke’s older sister, Emma, who vanished twenty years ago, suddenly reappears. As Clara’s fears grow, and she begins enlisting Luke’s family and friends in trying to find him, she starts to discover that there are many secrets she was unaware of, secrets which involve Luke and his family, some of which have been hidden for longer than Luke has been alive. No family is perfect, but sometimes what you don’t know about your family could prove to be dangerous. review: The Lies We Told is told in two different timelines and seemingly separate stories. You know they’re related some how but you don’t know quite yet. However, as you continue reading you discover the many ways the two stories connect…and it’s GOOD. I really enjoyed the fast-paced suspense of this book & the addictive plot line. rating: 4 out of 5 stars⭐️ 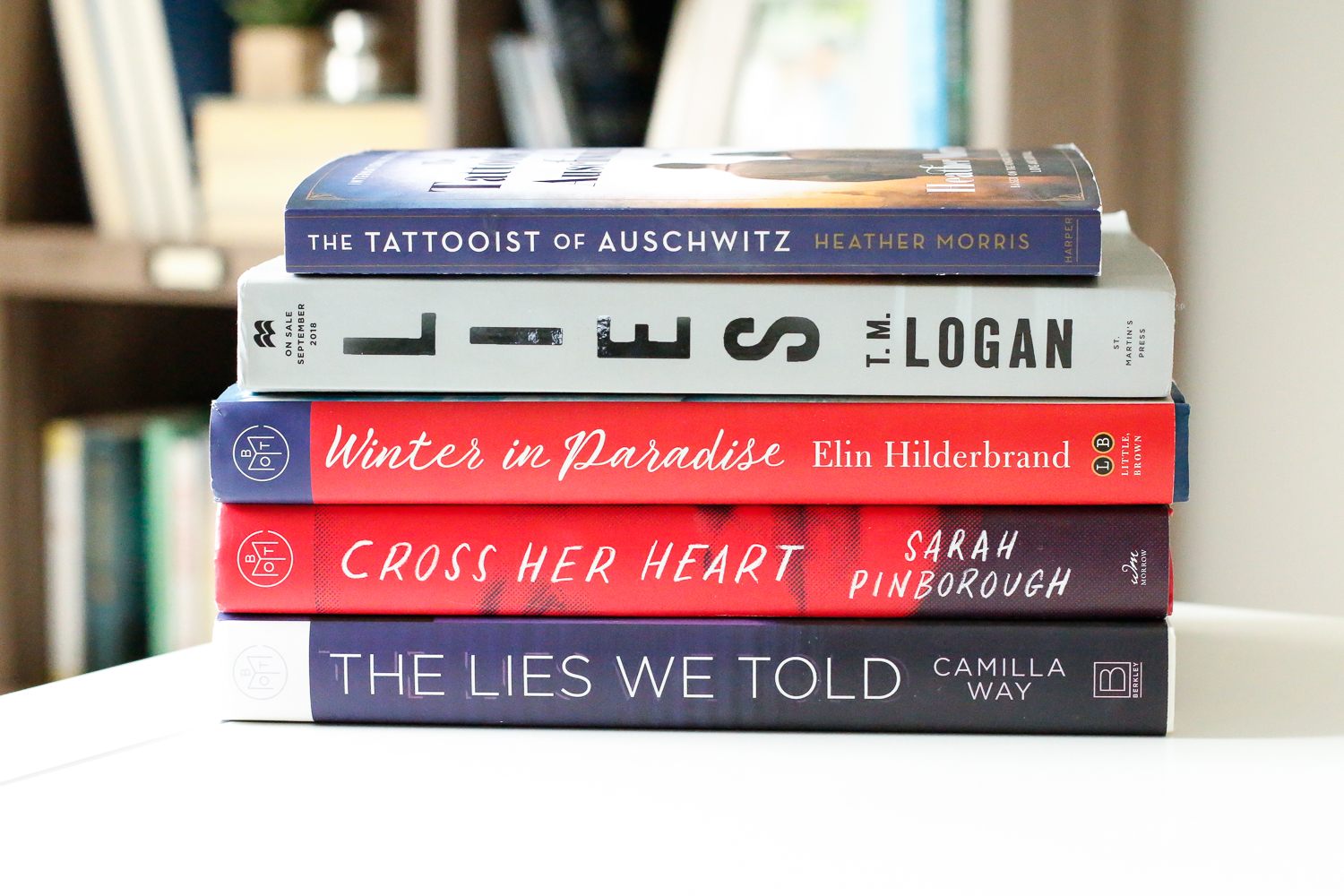 FIGHT OR FLIGHT BY SAMANTHA YOUNG | When Ava Breevort meets Caleb Scott at an airport, there is no love lost between them. Of course, they end up on the same flight, sitting right next to each other no less. Caleb is rough around the edges and lacks politeness. He may be a bit rude, but he’s gorgeous, rugged, and Scottish, and Ava finds herself intrigued. With all the animosity floating around them, there is a ton of chemistry, too. They find themselves spending time together during an unexpected and extended layover. After her trip home, she could use a release, plus she knows she’ll never see Caleb again. Except when he shows up in Boston…and is staying with one of her clients. What started out as a casual one-time thing suddenly feels all too real, emotions included. review: Fight or Flight is a classic enemies to lovers romance. If you’ve read (and liked) The Hating Game, The Kiss Quotient, or The Wedding Date, you’re sure to devour this one! This was the first book I have read by Samantha Young, but it’s safe to say this book has me wanting to read more! While this is a true romance novel – it does tackle some tough subjects such as forgiveness, friendship, and acceptance. I thought this book had a bit more substance than other romance novels! rating: 4 out of 5 stars⭐️

HIDDEN BODIES BY CAROLINE KEPNES | Joe Goldberg is no stranger to hiding bodies. In the past ten years, this thirty-something has buried four of them, collateral damage in his quest for love. Now he’s heading west to Los Angeles, the city of second chances, determined to put his past behind him. In Hollywood, Joe blends in effortlessly with the other young upstarts. But Joe can’t stop looking over his shoulder. The problem with hidden bodies is that they don’t always stay that way. They re-emerge, like dark thoughts, multiplying and threatening to destroy what Joe wants most: true love. review: This is the sequel to You, that I read last month, and this one just as wild of a ride as the first book. I listened to this one as an audiobook & y’all the narrator is PERFECT. Sure, like the first book, there’s a lot of “there’s NO WAY someone could get away with this” going on, but sometimes you’ve gotta suspend belief for the story, ya know?! This book is a lot like You, but with this book I was expecting his psychopathic nature, so it lost a bit of it’s enjoyment. However, I did enjoy listening to it as an audiobook. rating: 3 out of 5 stars⭐️

LIES BY T.M. LOGAN | What if you have the perfect life, the perfect wife and the perfect child–then, in one shattering moment, you discover nothing is as it seems? Joe quickly figures out his life has been a lie when he catches his wife at a hotel with another man. He quickly jumps to conclusions, but things aren’t as they seem. In fact, they’re worse. Joe will do whatever it takes to protect his family, but as the deception unravels, so does his life. review: After a few chapters I was definitely hooked. Without saying too much, this book was “unputdownable.” it had me flipping the pages like a crazy person. But, I have to say, I didn’t like the ending. It’s definitely not how I thought the book would play out – but I still don’t know how I fully feel about the ending. rating: 3.5 out of 5 stars⭐️

WINTER IN PARADISE BY ELIN HILDERBRAND | Elin Hilderbrand is back with a new “Winter” series and this time the scene is set in USVI, St. John to be exact. Irene has a damn near perfect life – a doting husband, a beautiful custom home, and two wonderful sons. But, like most things, if it seems too good to be true, it usually is. Irene’s life quickly changes when she receives a devastating phone call on New year’s Day that her husband is dead. But the most perplexing thing is that he was on the island of St. John when he died. Surely, Russ’ business hadn’t taken him there? When Irene and her sons arrive in the Caribbean, they’re shocked to find out another shocking discovery that leads them all to question everything. review: I love the departure from Nantucket to St. John, a place that is near & dear to me! I enjoyed recognizing places that she went on the island (including the beloved Caneel Bay!) I liked how this started, but have mixed feelings about how it progressed, especially when it came to the far-fetched love triangle… I realize it’s part of a trilogy, but I still don’t think I enjoyed it as much as I’ve loved her other books! I am anxious to see how the other two books develop! rating: 3.5 or 4 of 5 stars⭐️*It’s hard to fathom giving E.H. 3.5 stars!

file under: things that make me happy 💕 tiny be

slow Saturday morning with my little love in our m

one week until Christmas!!🎄 our annual @minted