How on earth are we already into December?! This last month flew by, mainly because it felt like I was constantly on the go! That said, I didn’t get a whole lot of reading in this month between traveling and the Thanksgiving holiday! I feel like I read a little less around the holidays because my time is limited and I have SO much to do! Anyone else feel that way? But I am so, so close to my reading goal for the year, so I’m hoping that I can read (or listen to!) nine books. Crossing my fingers I can do it!

This month was a mixed bag of books for me. Some I absolutely hated… like almost didn’t want to finish, others were only ok, and one was really good! After November’s “ehhh” month, I hope to round out the year with a few five star reads haha! As always, you can see what I’m reading on my Amazon Shop page & on IG stories! I would love to hear what you’re reading! 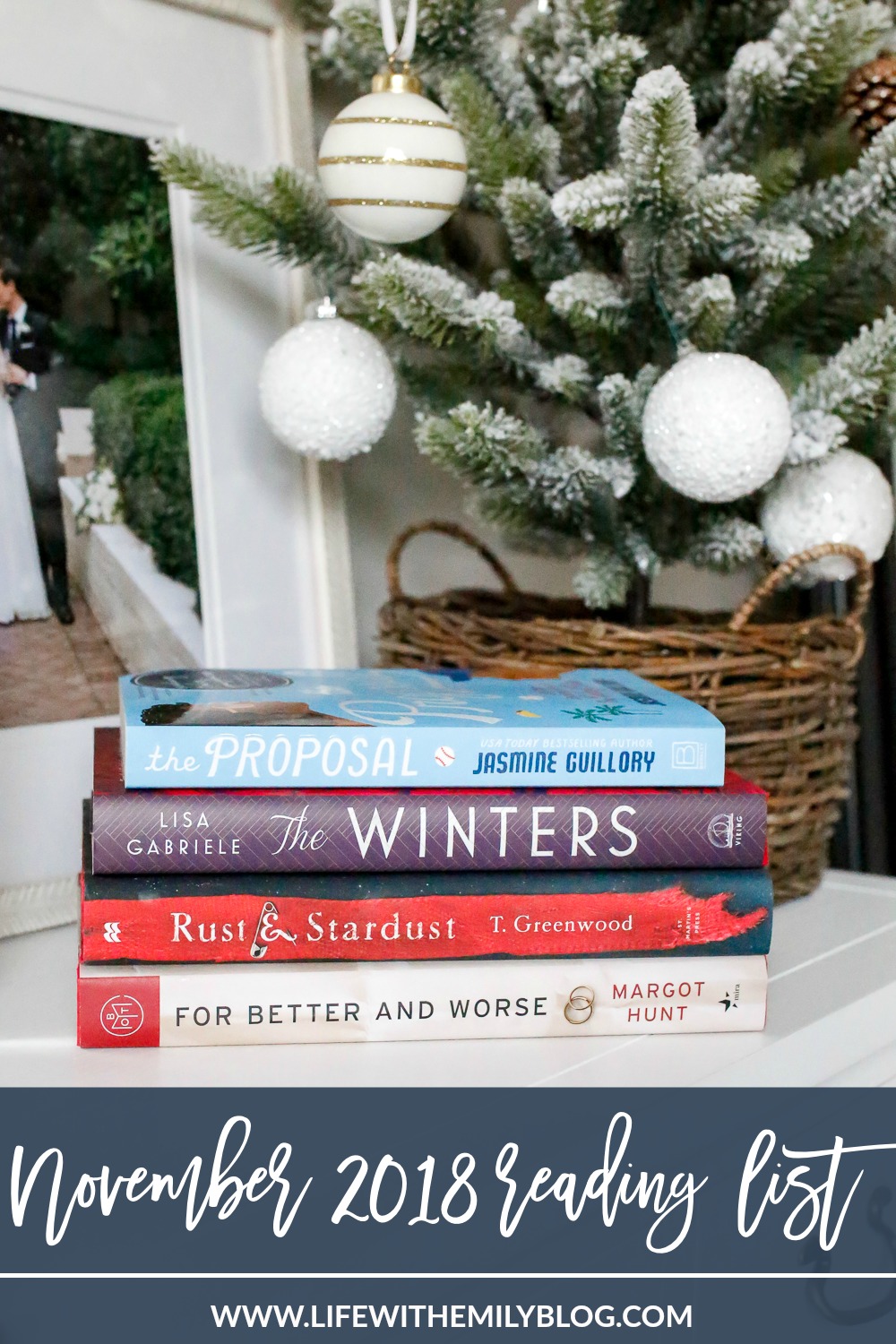 ONE DAY IN DECEMBER BY JOSIE SILVER | One Day in December is warm, captivating, unforgettable and quirky love story not only between couples but within a friendship as well. Laurie doesn’t believe in love at first sight. That is, until one day when she locks eyes with a by-stander while packed like a sardine on a bus. In that moment she feels a spark and knows she has to find her way back to that guy because she felt something with him. She make it her New Years resolution to find him, with no avail. Until one day he shows up… but not in the way she wanted him to. And so begins a story of longing, heartbreak, and possibly second chances? review: This was one of those books that was heartwarming and frustrating in one fell swoop! The writing is wonderful and the characters are so well-developed, I felt like I could relate to them on numerous levels. I loved the alternating perspectives of Laurie and Jack – it really allowed you to dive deeper into their relationship. But, I totally wanted to scream “NOOOO!!!” at some points in the book haha! This book is perfect to read during the holiday season and will remind you of those Hallmark Christmas movies that we can’t tear ourselves away from! rating: 3.5 out of 5 ⭐️

FOR BETTER AND WORSE BY MARGOT HUNT | How far would you go to help your significant other get away with murder? When Nat takes the law into her own hands to protect her family she knows she is crossing some lines. She is not going to allow a system that has many faults and cracks put her family in harms way. When her husband finds out what she has been doing he has no choice but to stick it out with her and get his hands in it as well. But the real question is, will they get away with it? review: If you’re looking for a quick, fast-paced read then be sure to pick up this book ASAP! This story is one that had me asking “what would I do if I were them?!” Sure, there are some moments that made me roll my eyes and think “there’s NO WAY they could get away with that!!!” so just know a bit of suspended belief is in order. Other than that, a great suspense novel that will keep you turning the page! rating: 4 out of 5 ⭐️

THE PROPOSAL BY JASMINE GUILLORY | When Nikole Paterson goes to a Dodgers game with her actor boyfriend the last thing she expects is a scoreboard proposal. Saying no isn’t the hard part–they’ve only been dating for five months, and he can’t even spell her name correctly. The hard part is having to face a stadium full of disappointed fans. And that’s exactly what she has to do as the stadium begins harassing her for saying “no.” Luckily, Carlos is there to help her escape from the camera crews. And naturally, Nikole and Carlos find themselves spending more and more time together. review: This one totally missed the mark for me. I read The Wedding Date and thought it was a contemporary meet-cute romance read. I took it for what it was… an easy read. I was excited to see the author was coming out with another book, but sadly I was severely disappointed. The writing felt incredibly juvenile, the storyline far-fetched and cheesy, riddled with cliches and all of the characters lacked depth of any kind. It all felt so “twee” while reading it. The one saving grace of this book was the diverse characters: a representation of a black woman, a latino love interest & non-cliche friends. This was one that I struggled to finish. rating: 2 out of 5 ⭐️

RUST & STARDUST BY T. GREENWOOD | When 11 year-old Sally Horner steals a notebook from the local Woolworth’s in 1948, she has no way of knowing that 52 year-old Frank LaSalle, fresh out of prison, is watching her, preparing to make his move. Accosting her outside the store, Frank convinces Sally that he’s an FBI agent who can have her arrested in a minute—unless she does as he says. This chilling novel traces the next two harrowing years as Frank mentally and physically assaults Sally while the two of them travel westward from Camden to San Jose, forever altering not only her life, but the lives of her family, friends, and those she meets along the way. review: This book was the best I read this month. Knowing that it’s based on a true story, it was incredibly hard to read at times. To know that something like this happened and that there are so many more of these stories out there now was absolutely chilling. The author did a phenomenal job of telling this tragic story in a way that was both heart-wrenching and eye-opening. After I finished this book I went down the rabbit hole to learn more about this story and Sally Horner. Be prepared to want to do the same once you finish! rating: 4.5 out of 5 ⭐️

THE WINTERS BY LISA GABRIELE | The Winters is a modern day re-telling of the classic novel Rebecca by Daphne du Maurier. A naive woman from the Cayman Islands is swept up in a surprisingly whirlwind romance with widower, senator Max Winter. They return to his secluded mansion, Asherley, a place where the ghost of Max’s first wife, Rebekah, looms inescapably large and ever present. Max and Rebekah’s adopted daughter, the dark and manipulative teenage Dani, is less than welcoming and hellbent on making life as difficult as possible with wedding preparations underway. As time goes on, the woman becomes increasingly unsettled and insecure. What lies beneath this family & what secrets do they hold? review: The story is entertaining and engrossing, and the foreboding throughout the book leads to a breath-taking and climactic finale. Admittedly, I haven’t read Rebecca (but now I want to ASAP) but this book really kept me guessing! I had an inkling of what was to come by the way the author weaved in details, but when I got to the end I was blown away! This was definitely more of a “slow build” but I think it worked really well and allowed the story to develop before you without missing any details. If you liked The Last Mrs. Parrish, you should read this one! rating: 3.5 out of 5 ⭐️

PIECES OF HER BY KARIN SLAUGHTER | Andrea knows everything about her mother, Laura. Because we all know our mothers, don’t we? But all that changes when a trip to the mall explodes into violence and Andrea suddenly sees a completely different side to Laura. Because it turns out that before Laura was Laura, she was someone completely different. For nearly thirty years she’s been hiding from her previous identity, lying low in the hope that no one would ever find her. But now she’s been exposed, and nothing will ever be the same again. review: I am a huge Karin Slaughter fan, so I was so excited to listen to this one on Audible! This one is a slight departure from her other books, but still very enjoyable. I loved the alternating POV between Laura and Andie as well as the differing time periods. I was so curious how the two time periods would end up colliding & I love how the story unfolded. rating: 4 out of 5 ⭐️

SHOP MY NOVEMBER READS BELOW