It’s time for my April 2019 reading list! Between my birthday, traveling & having plans almost every single weekend I didn’t get as much reading in as I would have liked, but I was still able to read six books this month! There were a few in the mix that were just kind of “blah” – nothing terrible, just not for me – and there were some standouts like The Lost Girls of Paris and All the Ugly and Wonderful Things! I have a hefty TBR pile for May with some highly anticipated titles, so I’m excited to (hopefully!) read more this coming month! As always, you can see what I’m reading and recommending in my Amazon Book Shop! 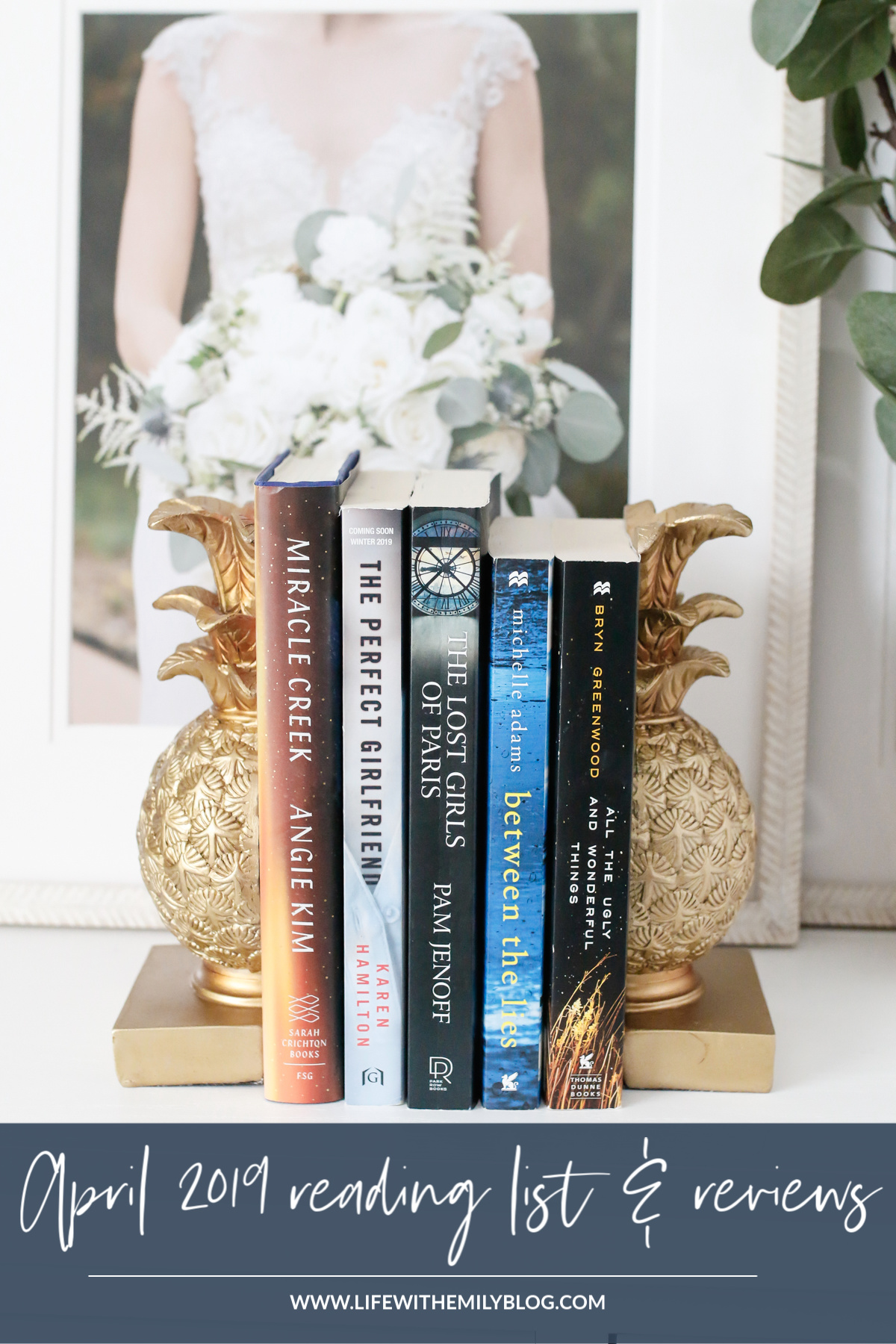 THE LOST GIRLS OF PARIS BY PAM JENOFF | The Lost Girls of Paris opens in 1946 as Grace Healy is trying to force some sort of semblance in her life after losing her husband during the war. While passing through Grand Central Terminal on her way to work she passes an abandoned suitcase and is unable to resist her curiosity. Her interest is immediately piqued when she discovers the photos of 12 girls. She does some digging and learns the photographers belong to Eleanor Trig, former leader of women agents who were part of the Secret Operations Unit (SOE). As she sets off on a journey to learn more about these women, she learns the truth about Eleanor, who helped train and protect the agents. She also discovers more about the war and the role the girls played in it, while feeling a fondness to Marie, an agent in the war. review: It’s no secret that I am a sucker for historical fiction, especially if it revolves around WWII. This book was captivating from the very beginning. Told in dual timelines with three alternating perspectives, the story moves seamlessly and if you’re like me, you’ll find yourself rooting for each character! The writing by the author is incredible, the characters were well developed, and I really enjoyed the dual timelines to help the story unfold. I even found myself doing some googling on the 12 girls from SOE after I finished the book. Truly fascinating! If you liked The Alice Network, be sure to pick this one up! rating: 4.5 out of 5 ⭐️

MIRACLE CREEK BY ANGIE KIM | In the small town of Miracle Creek, Virginia, Young and Pak Yoo run an experimental medical treatment device known as the Miracle Submarine—a pressurized oxygen chamber that patients enter for therapeutic “dives” with the hopes of curing issues like autism or infertility. But when the Miracle Submarine mysteriously explodes, killing two people, a dramatic murder trial upends the Yoos’ small community. What or better yet who started this explosion? Was it a protester who doesn’t approve of the dives? Or was it Young and Pak Yoo who set the fire as a way to cash in on the insurance money? As the trial progresses lies, mysterious notes and a few secrets are unearthed, making this case anything but simple. review: My friend Jordan basically *forced* me to buy this book and y’all I am so glad I gave into peer pressure because it was SUCH a good read. Based on the synopsis, I wasn’t sure if it would be for me. In fact, I disregarded this book when it was a BOTM pick. But then I heard court room drama and I was immediately hooked. The story is complex, the characters are well developed, and it’s an all around interesting plot! I became really invested in this plot line early on and couldn’t help but fly through this book trying to figure out who or what caused the explosion! There were quite a few twists and revelations that had me shocked. I loved that each character had its own narrative and point of view that gave a different perspective on the fire and the situation at hand. Each person in this book made sacrifices and it made me shift my perspective on things being black & white quite a bit! rating: 5 out of 5 ⭐️

BETWEEN THE LIES BY MICHELLE ADAMS | What would you do if you woke up and didn’t know who you were? When Chloe Daniels wakes up in a hospital she has no idea why she is there or what happened to her. Her family is surrounded by her but she doesn’t remember them. As she slowly begins to recover, she remembers bits and pieces of information, but she can’t be sure if they’re true or if she remembers these things from her dreams. All she knows is she’s missing information and something isn’t right. And she thinks everyone around her is lying and keeping secrets. review: Between the Lies started off strong and had a great premise. I mean, a girl wakes up and doesn’t know what put her in the hospital or who her family is? Count me in because this has got to be good! Unfortunately it wasn’t as gripping as I was hoping it would be. Towards the middle things started to get a bit repetitive. I didn’t find myself relating to the characters although I found them well developed and the book was well written. rating: 3 out of 5 ⭐️

ALL THE UGLY AND WONDERFUL THINGS BY BRYN GREENWOOD | Wavy is the daughter of a meth dealer who knows to never trust anyone. She is forced to raise herself and her younger brother, because her parents can’t be bothered. When one of her dad’s friends,Kellen, wrecks one night, Wavy is there to witness it…and to help him. The bond that forms between the two is unconventional and anything but normal. Their relationship slowly forms and things move from being acquaintances to them being in a relationship and everything that ensues is messy. review: All the Ugly & Wonderful Things is anything but a “feel good” book.This book was highly uncomfortable, at times disgusting, and a very sad read for me. It had sat on my bookshelf for quite a while until I finally decided to brave this one. Told in alternating POVs, from the two main characters and countless other spectators of their relationship, it allows you to unfold the story and recall the many disturbing details. I loved being able to read the many different accounts of their relationship – from her teacher to the police officers – each made this story more memorable. If you haven’t yet, add this one to your TBR, but be prepared for the slew of emotions you will feel as you read it and for the days after you finish it. This one made me question everything and this book will stay with me for quite a while. rating: 4 out of 5 ⭐️

THE PERFECT GIRLFRIEND BY KAREN HAMILTON | Juliette loves Nate. The fact that Nate broke up with her 6 months ago is nothing to Juliette. She has a Plan of Action to get her “true love” to take her back so she can prove she is the perfect girlfriend. Juliette sets out on her plan of action starting with becoming a flight attendant on the same airline where Nate is a Pilot. She uses her position as a flight attendant to her stalkerish advantage and puts her plan into place. There is nothing that could stop Juliette. review: I was so excited to receive an ARC of this book since I am a big suspense/thriller fan. A book that started off strong quickly fell short for me with its far fetched and highly unrealistic plot. The first half I was intrigued and curious to see where the book would go, but by the second half it had unraveled and took a weird turn. Maybe it’s because I read so many thrillers that this one couldn’t hold a candle?! I’m well versed in having to suspend reality to an extent with some books, but this one was even too unrealistic for that. I will say, it did keep my reading and it was a fast paced book. I waited for a major twist that never happened and I was pretty disappointed at the ending. This was just an “ok” book for me. I have seen a lot of varying reviews on this one. I think some people will really love it and if it’s on your bookshelf I say give it a shot, you may be one of them! rating: 3 out of 5 ⭐️ 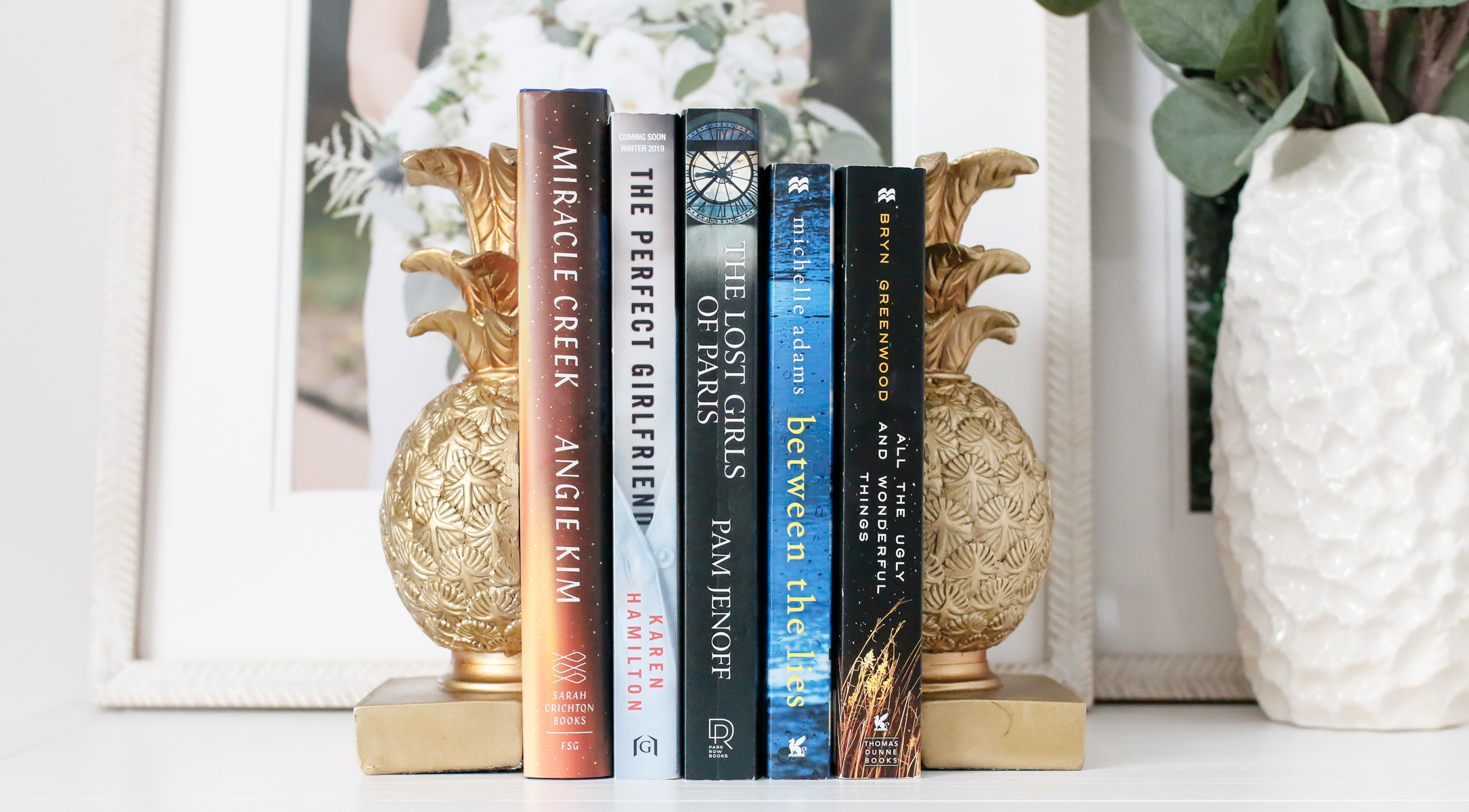 THE INVITED BY JENNIFER MACMAHON | In a quest for a simpler life, Helen and Nate abandon the comforts of suburbia and their teaching jobs to take up residence on a too good to be true plot of land to build their dream home. When they discover that this charming property has a dark and violent past, Helen, a former history teacher, becomes consumed by the legend of Hattie Breckenridge, a woman who lived and died there a century ago. As Helen starts carefully sourcing decorative building materials for her home–wooden beams, mantles, historic bricks–she starts to unearth, and conjure, the tragic lives of Hattie’s descendants, three generations of “Breckenridge women,” each of whom died amidst suspicion, and who seem to still be seeking something precious and elusive in the present day. review: I had seen a few of my friends rave about this, so I was looking forward to this one! The story opens by describing the back story of Hattie and it grabbed my attention right away. I enjoyed the different POVs of Helen and Olive and found the story hard to put down! A few times I had to stop reading it before bed because I was afraid I would have nightmares. If you like suspense books with a hint of supernatural and like to be kept guessing, then this book is for you! rating: 4 out of 5 ⭐️

GRACE AFTER HENRY BY EITHNE SHORTALL | Grace and Henry are about to move into their new home when Grace gets a call that Henry has been in a terrible accident and didn’t make it. She retreats from everything and everyone for a few months until she is ready to move forward. She moves into their home, she goes back to work, and she tries to live each day at a time. Each day remains a struggle for Grace as she thinks she sees Henry everywhere – from the grocery store, at her work, and even in the cemetery. She is grief stricken and not ready to lose him or the memories they shared together. One day she is having work done on her home when she thinks she spots Henry again, but this time it’s Andy, who does have striking similarities to Henry. As she learns to manage her grief, she realizes that she can still have those memories and that she may just be ready to live her “new normal.” review: Without giving too much away in the synopsis, I really enjoyed this book. It was equally heart wrenching as it was heart warming. I thought the author did a great job at portraying loss and grief. I did have some differing thoughts on Andy and his involvement in the book. There were times that I questioned his authenticity and if I even liked him as a character. I didn’t like the ending, but overall it was a cute book… which I needed after some other heavy books! rating: 3.5 out of 5 ⭐️