It’s hard to believe that our sweet Noah James has been in our life for one month already! It seems like just yesterday we were anticipating his arrival and now I can’t remember life without him in it. It’s true what they say, babies don’t keep, and this past month has proven just that. I feel like he has grown and changed so much in the last few weeks and while I’m so grateful that he’s healthy and growing, I can’t help but be a little sad that these moments as a newborn are so fleeting. A few days ago I asked for content requests on IG stories and I got an overwhelming response to post more Noah and share updates, so let’s jump right in with the first four weeks!

It’s been really rainy and gloomy here, so not the best for photos inside or outside, but I couldn’t resist getting a few to celebrate him being one month old! The outfit he’s wearing is one of Nick’s baby outfits, which is so special!

p.s. I’ll be sharing more on my postpartum and breastfeeding journey in a few weeks and will also share our newborn must-haves once we have figured out what works best for us!

Noah was born on July 21, 2020 at 3:42 p.m. You can read his birth story here. We brought him home on the evening of July 22nd and have been adjusting to life with a newborn and as a family of three ever since! Bringing home a newborn is so overwhelming and a bit nerve wracking. You could have read every single book available and feel prepared, but when the time comes it’s scary. You’re suddenly responsible for a tiny human and you just pray that you know what to do! With that said, you do truly figure it all out and it does come naturally. I remember being so nervous the first night that we were alone with him at home. I think I checked to make sure he was breathing no fewer than 5 times that night. We’re slowly feeling more confident and getting into a good groove with him! 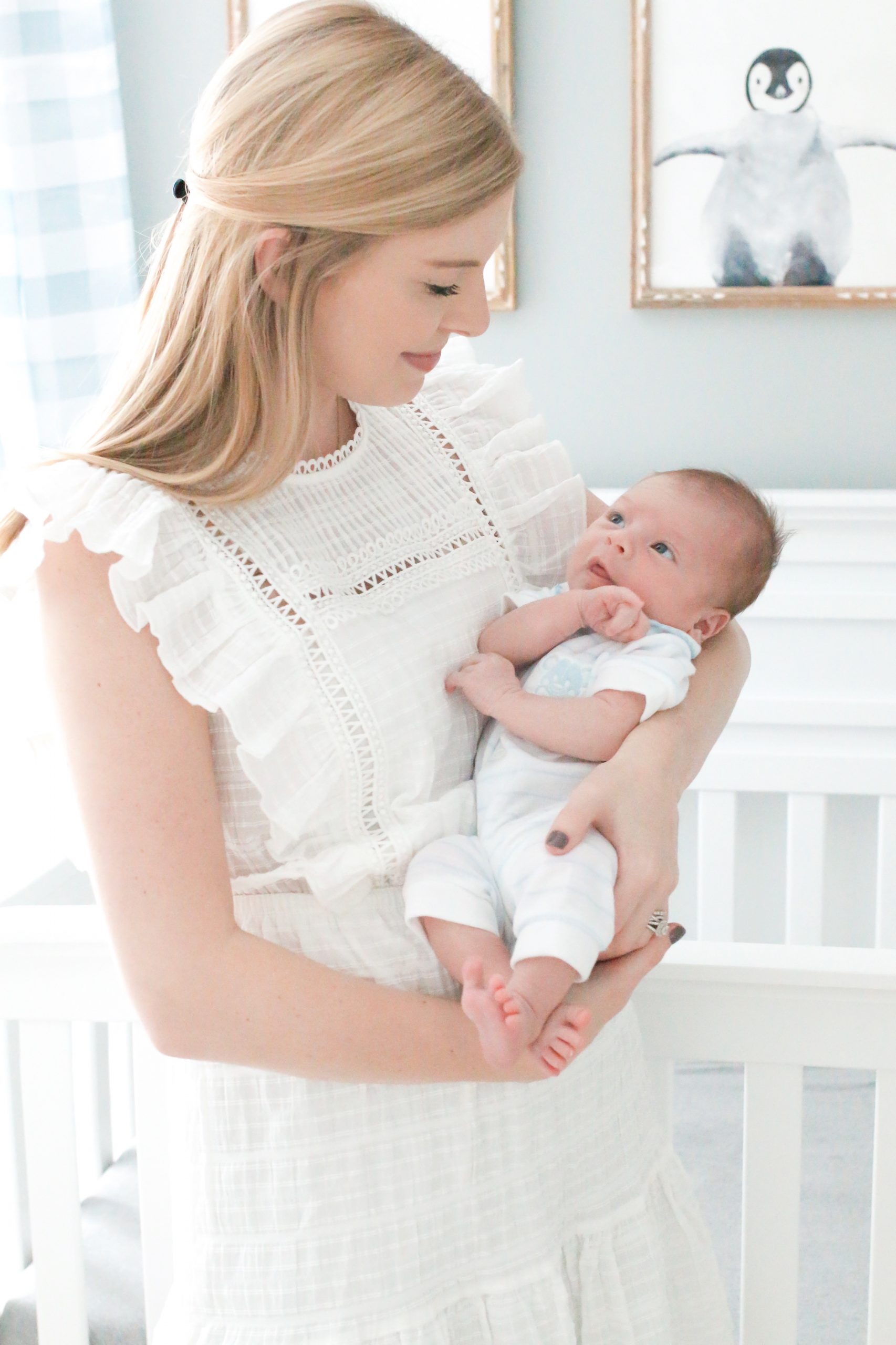 The first few weeks of his life were spent figuring out how to be a parent, the best way to care for a newborn, and adjusting to life as a family of three (well, five including the animals!). All of that was a bit overwhelming and a lot of the first month was trial and error to see what worked and what didn’t. Nick had 4 weeks of paternity leave and I’m so thankful he was here to help with everything! I took a few weeks off as well and it was nice to soak in all the newborn snuggles and just “be.”

I’ll go into more detail below, but Noah has been a really good baby and it’s made the transition into parenthood so easy. Sure, there have been days where it feels like nothing gets done or that he’s really fussy, but I know I will long for those days soon, so we’re taking them in stride. Before Noah arrived Nick and I made sure that we were both on the same page, expressed the things we need to have a sense of normalcy amongst the chaos (me: a shower, Nick: to work out) and made a game plan for how we wanted to tackle everything. We both also agreed to speak up if we’re having a bad day or if we need something. Having that open, honest communication has been key in these first few weeks, especially when we’re sleep deprived. Nick has fallen into being a dad effortlessly and it makes me so proud every time I see him with Noah. I didn’t think I could love him more, but seeing him as a dad melts my heart! 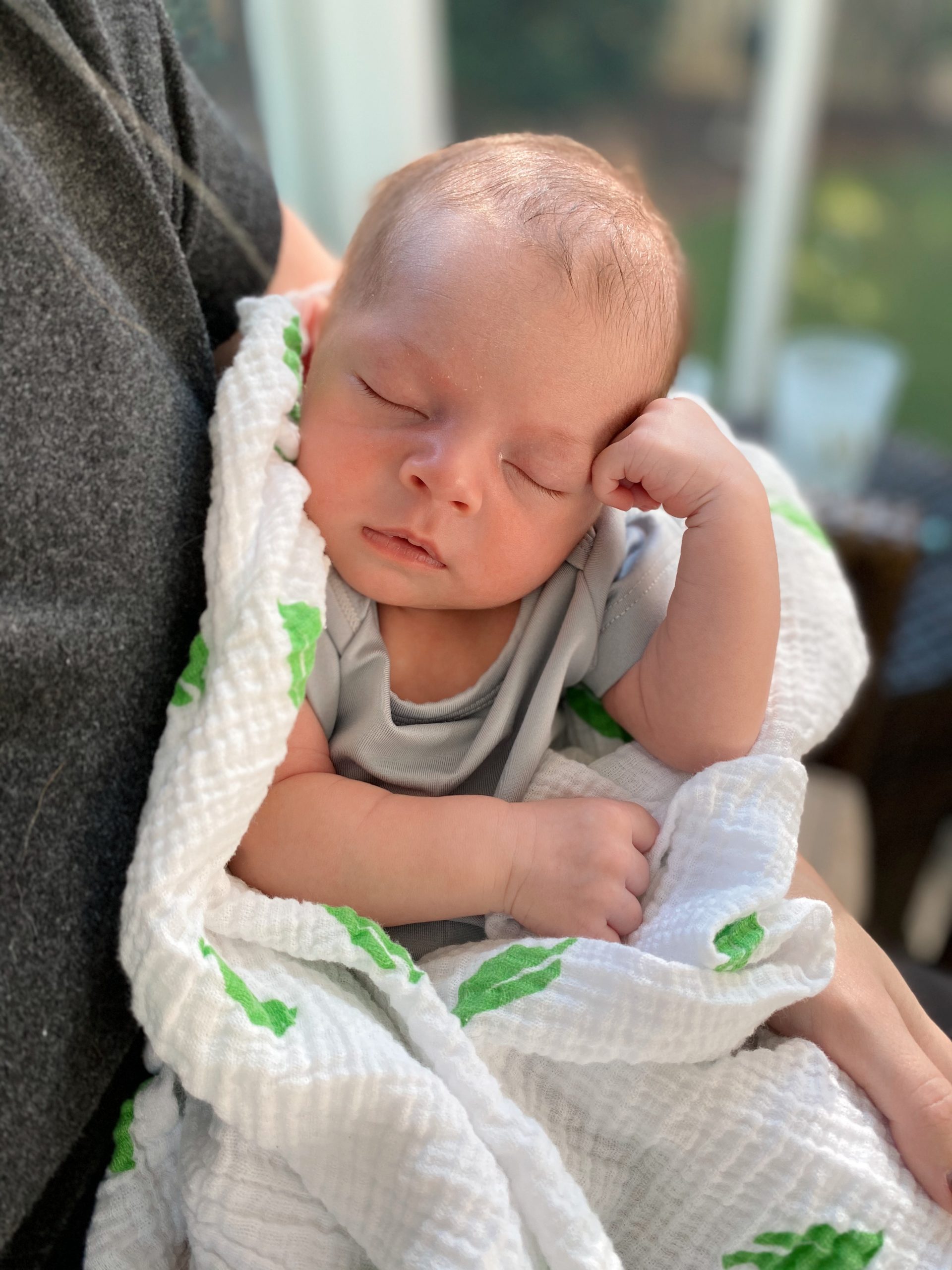 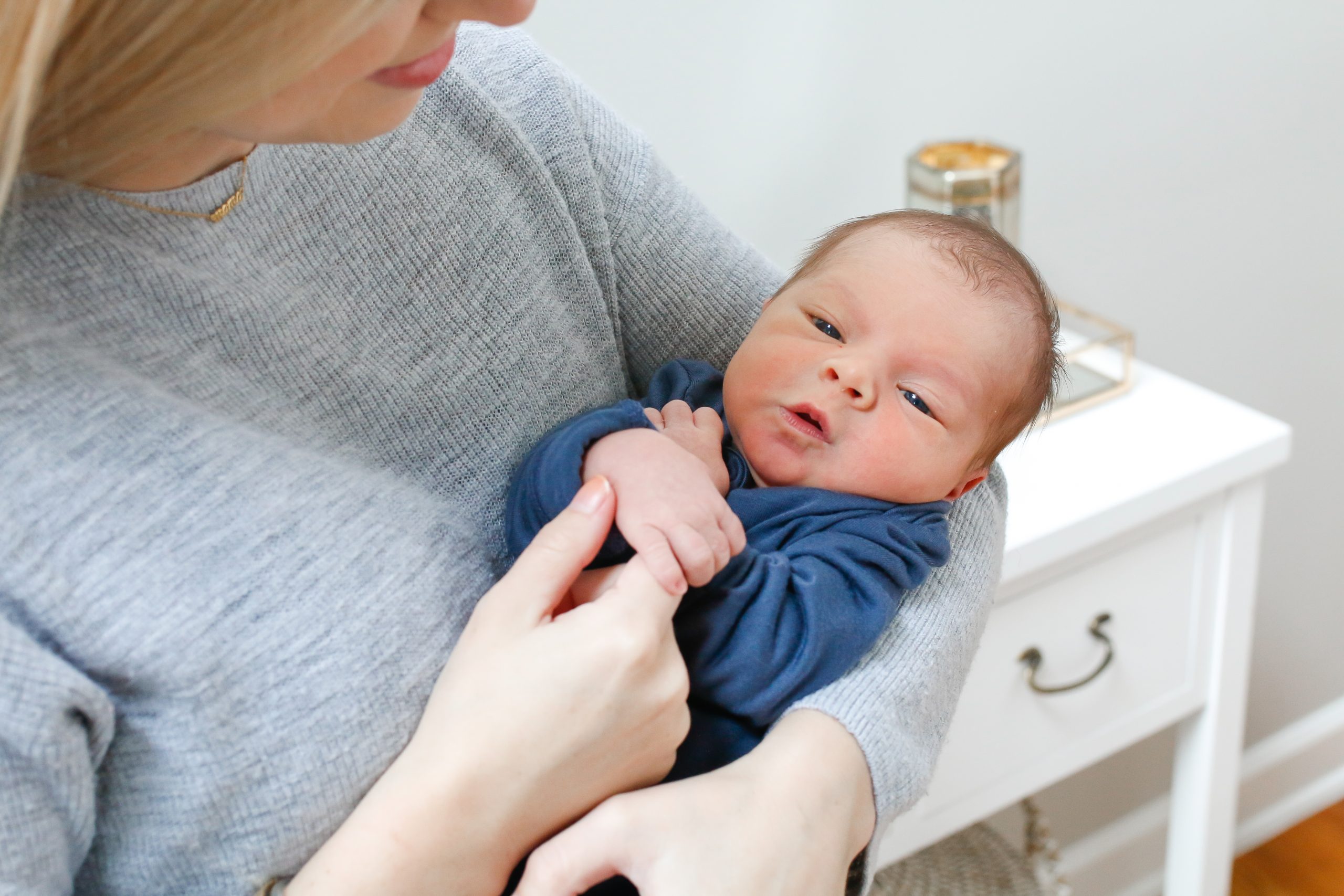 While we were in the hospital we were able to meet with two lactation consultants who were helpful in assisting with breastfeeding and latching. I had a great amount of colostrum and he had a good latch. Once we got home and my milk came in, I struggled a bit with breastfeeding, mainly because I was so engorged and so incredibly sore. Noah ended up losing about 7-8% of his weight after birth (which is normal), so after meeting with our pediatrician we did end up supplementing with formula to help get his weight up. It took about two weeks to get him back to his birth weight but now he’s growing and gaining weight well. Since we were supplementing with formula for a few feeds, we introduced him to a bottle very early on. He hasn’t had any issue with “nipple confusion” or anything though! He really likes the Comotomo and Boon Nursh bottles. Now we give him a few bottles a day so that I can pump or Nick can feed him.  After we got him back to his birth weight we ended up meeting with a lactation consultant through our pediatrician and she was fantastic. She really helped identify some of the issues we were having, like a painful latch, etc. It turns out that Noah has a tongue and lip tie, so we’re working on getting those taken care of and hopefully breastfeeding will come much more naturally!

I feel so lucky that Noah is a pretty good sleeper (for now!). The first two weeks weren’t nearly as bad as I thought they were going to be. I was fully prepared to get virtually no sleep, but he gave us 2-3 hour sleep stretches a night from the very first day that we were home. There were a few nights where he wanted to cluster feed every hour, so those nights were exhausting, but otherwise he’s been great so far. We originally had him sleeping in our room in the Halo Swivel Sleeper Bassinest but he *hated* it. Come to find out the bassinet was tilted and not level, so we ended up returning it. This seems to be a common issue with the Halo Bassinets, so just be aware if you have one. It caused Noah to turn on his side, which really scared me. We ended up moving our Uppababy Bassinet to our room and he sleeps really well in it.

At two and a half weeks we started him on the Moms on Call schedule. We had been loosely following it, but we really started to follow it more closely right before he turned 3 weeks. I knew we would all thrive on having a schedule of sorts and it’s worked out really well for us. We started having him take at least one crib nap a day at two weeks and we ended up moving him to sleep in his crib overnight soon after. We planned to keep him in our room in the bassinet for the first 4-6 weeks, but he sleeps much better in his room!

This past month it’s been fun getting to know Noah a little bit and figure out what he likes and dislikes! It’s truly amazing seeing him discover things through his eyes.

likes: he loves being carried in the Solly wrap and Baby Bjorn carrier – I always break these out during his “witching hours” and they help him settle so quickly. He really enjoys bath time and has a bit of a love-hate relationship with tummy time. He is so intrigued by everything on his Lovevery Play Gym and it’s the cutest thing!
dislikes: he does not like diaper changes or outfit changes. He has numerous pee explosions a week (things they don’t tell you about having a boy!) so changing those are always a loud adventure in our house haha!
milestones: he is starting to recognize our faces more and from farther away, which is so cute! We have been using the black and white cards from the Lovevery 0-12 week Play Kit to help him with eye tracking and he’s doing so well! He’s also starting to hold his head up better when doing tummy time.

thanks so much for reading! xx