This month the weather started to cool down, it started to get darker earlier and I found myself reaching for books more and more! I spent many weekend afternoons out on the porch reading a good book – gosh I love this time of year! In September I read six books and almost all of them I enjoyed! if you’re looking for a good read this month I highly suggest picking up The Boys’ Club (loved!) or Majesty (but make sure to read American Royals first!). So, let’s get started with this month’s reviews… 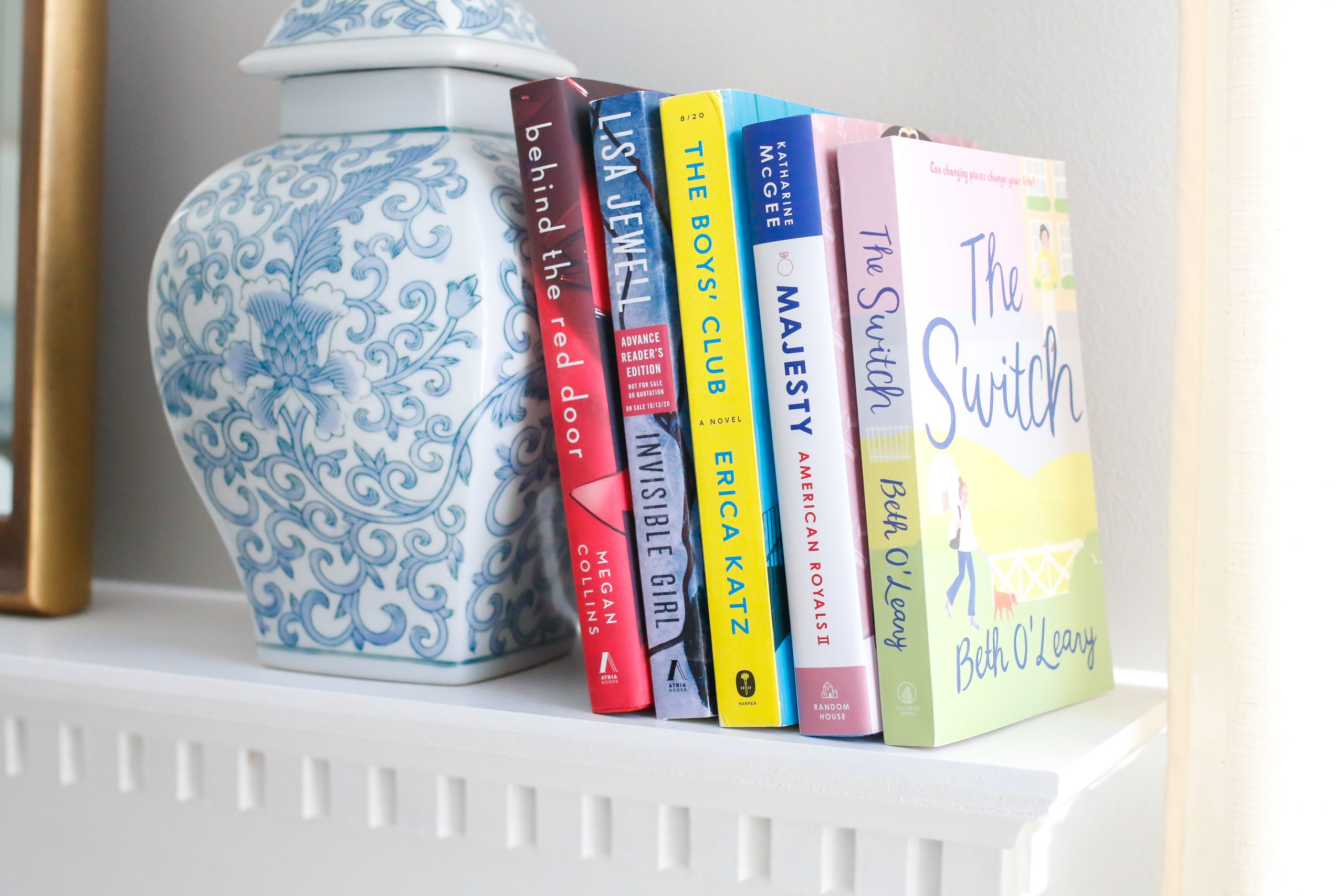 THE SWITCH by Beth O’Leary | When overachiever Leena Cotton is ordered to take a two-month sabbatical after blowing a big presentation at work, she escapes to her grandmother Eileen’s house for some long-overdue rest. Eileen is newly single and about to turn eighty. She’d like a second chance at love, but her tiny Yorkshire village doesn’t offer many eligible gentlemen. So they decide to try a two-month swap. Eileen will live in London and look for love. She’ll take Leena’s flat, and learn all about casual dating, swiping right, and city neighbors. Meanwhile Leena will look after everything in rural Yorkshire: Eileen’s sweet cottage and garden, her idyllic village, and her little neighborhood projects. But stepping into one another’s shoes proves more difficult than either of them expected. review: After reading The Flatshare last year by O’Learly, I knew I wanted to read this book when it was released. The author does a great job of writing a lighthearted book that also goes a bit deeper. This book explores mental health, loss, relationships with others, and how to love yourself. I adored the characters in this book and found myself rooting for them until the very end! The message of this book is that it’s never too late to change everything or to find yourself. If you’re looking for a heartwarming quick read, be sure to pick this one up! rating: 4.5 out of 5 ⭐️

MAJESTY by Katharine McGee | Is America ready for its first queen? As America adjusts to the idea of a queen on the throne, Beatrice grapples with everything she lost when she gained the ultimate crown. Samantha is busy living up to her “party princess” persona…and maybe adding a party prince by her side. Nina is trying to avoid the palace – and Prince Jefferson – at all costs. And a dangerous secret threatens to undo all of Daphne’s carefully laid “marry Prince Jefferson” plans. A new reign has begun. review: Majesty is the sequel to American Royals, and without giving too much away, it picks up right where American Royals left off and everything seems to be falling apart at the seams. Majesty continues to follow Beatrice, Samantha, Nina and Daphne as they enter into a new season, one of change, loss and new expectations. I really loved seeing how the characters dealt with their struggles. I absolutely loved this sequel and really liked the storyline, although it’s not at all how I predicted it. This book ended on less of a cliffhanger than American Royals did, but I’m still crossing my fingers for a third book. rating: 5 out of 5 ⭐️

THE BOYS’ CLUB by Erica Katz | Alex Vogel has always been a high achiever who lived her life by the book. When she accepts a dream offer at the prestigious Manhattan law firm of Klasko & Fitch, she promises her sweet and supportive longtime boyfriend that the job won’t change her. Yet Alex is seduced by the firm’s money and energy…and by her cocksure male colleagues, who quickly take notice of the new girl. In the firm’s most profitable and competitive division, Mergers and Acquisitions, Alex works around the clock, racking up billable hours and entertaining clients late into the evening. While the job is punishing, it has its perks. She knows the corporate world isn’t black and white, and that to reach the top means playing by different rules. But who made those rules? And what if the system rigged so that women can’t win, anyway? When something happens that reveals the dark reality of the firm, Alex comes to understand the ways women like her are told—explicitly and implicitly—how they need to behave to succeed in the workplace. Now, she can no longer stand by silently—even if doing what’s right means putting everything on the line to expose the shocking truth. review: This book is one of my favorites that I have read recently. I flew through this and felt like I learned a lot while being sucked into the drama. The Boys’ Club gives a peek into the life of Biglaw and what it’s like to work in a male-dominant field, while diving into all the scandal that’s sometimes hidden beneath the surface. The character development in this book is fantastic – I loved seeing Alex’s character grow and change as she got deeper into M&A work. I really enjoyed the fact that the author currently works in Biglaw and it left me wondering how much of this reflects real life with her job! If you’re looking for a smart take on real life issues (like gender equality and women in the workplace) be sure to pick this one up! rating: 5 out of 5 ⭐️

BEHIND THE RED DOOR by Megan Collins | When Fern Douglas sees the news about Astrid Sullivan, a thirty-four-year-old missing woman from Maine, she is positive that she knows her. Fern’s husband is sure it’s because of Astrid’s famous kidnapping—and equally famous return—twenty years ago, but Fern has no memory of that, even though it happened an hour outside her New Hampshire hometown. And when Astrid appears in Fern’s recurring nightmare, one in which a girl reaches out to her, pleading, Fern fears that it’s not a dream at all, but a memory. Back home in New Hampshire, Fern purchases a copy of Astrid’s recently published memoir—which may have provoked her original kidnapper to abduct her again—and as she reads through its chapters and visits the people and places within it, she discovers more evidence that she has an unsettling connection to the missing woman. As Fern’s search becomes increasingly desperate, she hopes to remember her past so she can save Astrid in the present…before it’s too late. review: This was a quick suspense book had me invested from the beginning. The premise of this story really hooked me, but overall it was only an “ok” read to me. While I thought the writing was great and the characters were well developed, I found much of the story to be predictable or far-fetched. The author did a great job of creating an ominous atmosphere throughout the book and that left me intrigued. If you’re looking for a suspenseful read that you will speed through, maybe give this one a try! rating: 3 out of 5 ⭐️

HEART BONES by Colleen Hoover | Life and a dismal last name are the only two things Beyah Grim’s parents ever gave her. After carving her path all on her own, Beyah is well on her way to bigger and better things, thanks to no one but herself. With only two short months separating her from the future she’s built and the past she desperately wants to leave behind, an unexpected death leaves Beyah with no place to go during the interim. Forced to reach out to her last resort, Beyah has to spend the remainder of her summer on a peninsula in Texas with a father she barely knows. Beyah’s plan is to keep her head down and let the summer slip by seamlessly, but her new neighbor Samson throws a wrench in that plan. Samson and Beyah have nothing in common on the surface. She comes from a life of poverty and neglect; he comes from a family of wealth and privilege. But they’re drawn to each other. With an almost immediate connection too intense for them to continue denying, Beyah and Samson agree to stay in the shallow end of a summer fling. What Beyah doesn’t realize is that a rip current is coming, and it’s about to drag her heart out to sea. review: Colleen Hoover is an auto-read author for me. Most of the time I don’t even read the synopsis of her books before starting them because I know I’ll enjoy them. Luckily, she did it again! Heart Bones is a YA book that is very character driven with a lot of build up between Samson and Beyah. I really enjoyed how endearing and damaged these characters were and how their story – both separate and together – unfolded. This book really drives home the fact that not everything is black and white as it seems and there’s always room for a lot of gray. rating: 4.5 out of 5 ⭐️

INVISIBLE GIRL by Lisa Jewell | Owen Pick’s life is falling apart. In his thirties, a virgin, and living in his aunt’s spare bedroom, he has just been suspended from his job as a teacher after accusations of sexual misconduct, which he strongly denies. Across the street from Owen lives the Fours family, headed by mom Cate, a physiotherapist, and dad Roan, a child psychologist. But the Fours family have a bad feeling about their neighbor Owen. He’s a bit creepy and their teenaged daughter swears he followed her home from the train station one night. Meanwhile, young Saffyre Maddox spent three years as a patient of Roan Fours. Feeling abandoned when their therapy ends, she searches for other ways to maintain her connection with him, following him in the shadows and learning more than she wanted to know about Roan and his family. Then, on Valentine’s night, Saffyre Maddox disappears—and the last person to see her alive is Owen Pick. review: This book is a bit of a slow burn, and with that said, I enjoyed this book and kept turning the pages to see how this would play out! This book has a lot of layers to it and the author does a fantastic job of peeling them back *just* enough to leave you wanting more! I really wasn’t sure how exactly this book would end, but I enjoyed the ending. I always find Lisa Jewell’s books to be less twisty and suspenseful and more focused, giving you small clues that still provide a great ending! rating: 3.5 out of 5 ⭐️