This month was a mixed bag in terms of the books I read! I read five books in November and really enjoyed a few and really disliked one. Some months are better than others… oh well! If you’re looking to add a thriller this month, I suggest Don’t Look For Me. So, let’s go ahead and get started with the five books I read in November. 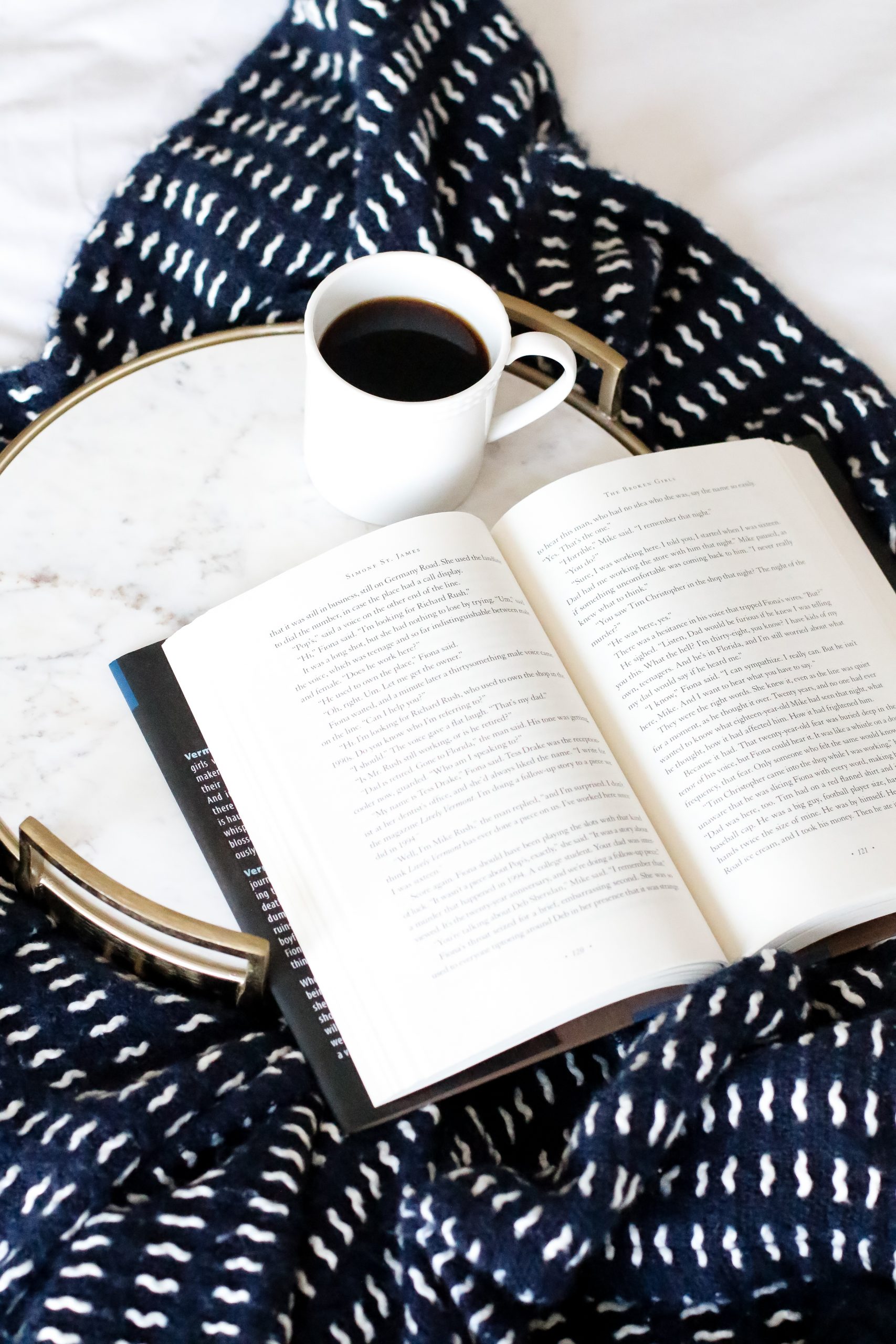 The five books I read in November

DON’T LOOK FOR ME by Wendy Walker | One night, Molly Clarke walked away from her life. It happens all the time. Women disappear, desperate to leave their lives behind and start over. She doesn’t want to be found. Or at least, that’s the story. But is that what really happened to Molly Clarke? When a new lead comes in after the search has ended, Molly’s daughter, Nicole, begins to wonder. Nothing about her mother’s disappearance makes sense. Nicole returns to the small, desolate town where her mother was last seen to find the truth. The locals are kind and eager to help. Until secrets begin to reveal themselves and she comes closer to the truth about that night—and the danger surrounding her. review: Let me just start by saying that I absolutely devoured this book. It’s been a while since a psychological thriller really grabbed me and this one hooked me from the start. This book is told in two points of view, Molly, who is missing and Nicole, her daughter, who is frantically trying to put the pieces together. Both are strong female characters and I enjoyed reading from both perspectives as it really helped create an atmospheric element to the story. This book was compulsive and I found myself reading late into the night because I simply couldn’t put it down. The pacing is great, it is filled with many intense moments that will leave you on the edge of your seat and the creepy factor is high on this one! rating: 5 out of 5 ⭐️

ROOMIES by Christina Lauren | Holland Bakker has been going out of her way during her commute to work in order to listen to a handsome stranger play his guitar at the subway station near her apartment. When she finally works up the courage to speak to Calvin McLoughlin, she gets attacked by a drunken man and though Calvin steps in and calls the police, he quickly disappears. In a weird twist of fate, her uncle loses the star violinist in his popular Broadway musical, and Holland knows a way to pay Calvin back. Get Calvin an audition, after all she knows how talented he is. Calvin is the perfect fit. The problem is he’s in the country illegally and cannot accept the job. So Holland proposes a fake marriage so he can get his dream job and her beloved uncle can continue his successful Broadway musical. Can this even work? review: Christina Lauren is an auto-buy author duo for me and I usually read their books as soon as they come out. For whatever reason this one had sat on my shelf for quite some time and I finally got around to reading it. As always, they write the best rom-coms that sweep you off your feet and have you falling for the characters! This book was so enjoyable and the perfect rom-com to curl up with and read. Holland is loyal, genuine, and strong while Calvin is talented, swoon worthy and a bit down on his luck. The cast of secondary characters are just as lovely (well, except for LuLu!). I particularly enjoyed the well-thought research that clearly went into this book in terms of Broadway and musical performances. This was certainly a cute, quick read!  rating: 4 out of 5 ⭐️

ON DUBLIN STREET by Samantha Young | Four years ago, Jocelyn left her tragic past behind in the States and started over in Scotland, burying her grief and forging ahead without attachments. Her solitary life is working well – until she moves into a new apartment on Dublin Street, where she meets a man who shakes her carefully guarded world to its core. Braden Carmichael is used to getting what he wants, and he’s determined to get Jocelyn into his bed. Knowing how reserved she is, Braden proposes an arrangement that will satisfy their intense attraction without any strings attached. But can these two keep their emotions out of it? review: Well this book was certainly steamy! This book starts off in a typical boy-meets-girl fashion but quickly turns into so much more. I really appreciated that Joss’s character had a strange, tragic past and that she struggled with how to deal with the grief. It’s not often in romances that you find these authentic, deeply flawed characters. Braden has his own issues and misgivings as well, making them more alike than they originally thought. This book, while a true romance, goes a bit deeper than that as well! If you’re a fan of steamy contemporary romances, add this one to your list. rating: 4 out of 5 ⭐️

ANXIOUS PEOPLE by Fredrik Backman | Looking at real estate isn’t usually a life-or-death situation, but an apartment open house becomes just that when a failed bank robber bursts in and takes a group of strangers hostage. Each of them carries a lifetime of grievances, hurts, secrets, and passions that are ready to boil over. None of them is entirely who they appear to be. And all of them—the bank robber included—desperately crave some sort of rescue. As the authorities and the media surround the premises, these reluctant allies will reveal surprising truths about themselves and set in a motion a chain of events so unexpected that even they can hardly explain what happens next. review: If you have ever read Backman before, you know that his books are quite quirky and clever. I was excited to receive an advanced copy of this book and it didn’t disappoint. At first I had a hard time connecting to the characters in this book, but as the story continued and we learned more about each character, I really enjoyed it. This book is so much more than a bank robbery gone wrong. This book dives deep into human spirit and the need for empathy, human relationships, mental health and connections to each other. Each of the characters are eccentric, complex and so well developed. This book is incredibly witty in the way their stories are told. I’m really glad I stuck with this book and continued to the end because it was a fantastic read and really kept me thinking about humans and how deeply flawed we are but in the most beautiful ways. rating: 5 out of 5 ⭐️

THE LIES THAT BIND by Emily Giffin | One Saturday Cecily Gardner finds herself sitting alone in a dive bar in New York’s East Village, questioning her life. Feeling lonely and homesick for the Midwest, she wonders if she’ll ever make it as a reporter in the big city–and whether she made a terrible mistake in breaking up with her longtime boyfriend, Matthew. As Cecily reaches for the phone to call him, she hears a guy on the barstool next to her say, “Don’t do it–you’ll regret it.” Something tells her to listen, and over the next several hours–and shots of tequila–the two forge an unlikely connection. That should be it, they both decide the next morning, as Cecily reminds herself of the perils of a rebound relationship. Yet despite all their obstacles, they can’t seem to say goodbye, and for the first time in her carefully constructed life, Cecily follows her heart instead of her head. Then Grant disappears on a tragic day. Fearing the worst, Cecily spots his face on a missing-person poster, and realizes she is not the only one searching for him and the questions pile up fast. review: The past few Emily Giffin novels have been misses for me, but I decided to give this one a shot anyway. I was enjoying this book until I got to the part where Grant disappears on 9/11. And from that point on the story went downhill fast for me. It doesn’t sit well with me when books use 9/11 as a crucial plot line. In this particular book it was used to create a “love triangle” of sorts and that felt crass and inappropriate. Cecily was a problematic character for me. She claimed to be overwhelmed by a lot, but had the ability to bounce back from each situation with almost no issues, which wasn’t realistic at all. Much of the last half of the book seemed far-fetched and unbelievable. I can’t say that I would recommend this one. rating: 2 out of 5 ⭐️

shop the books I read in November