Can you believe it’s already August? The past two months have been a bit of a whirlwind – between soaking up summer moments, planning Noah’s birthday party, and traveling to visit family, it’s been nonstop lately. I realized last week I never shared my June reading list (oops!) so I’m looping it in with my July reading list. I’ve read a lot of great books over the last two months, including some highly anticipated books from my summer reading guide & a backlist book that I had been meaning to read for quite some time. You can’t go wrong with any of the books I’ms haring today – but I highly recommend The Siren and The Soulmate Equation.

As always, you can see my latest reads on my bookstagram account @enw_reads (I share ALL things books there!) and on my Amazon Shop page! If you have any book recs, send them my way! I would love to hear what you have read recently in the comments. Thanks for stopping by! 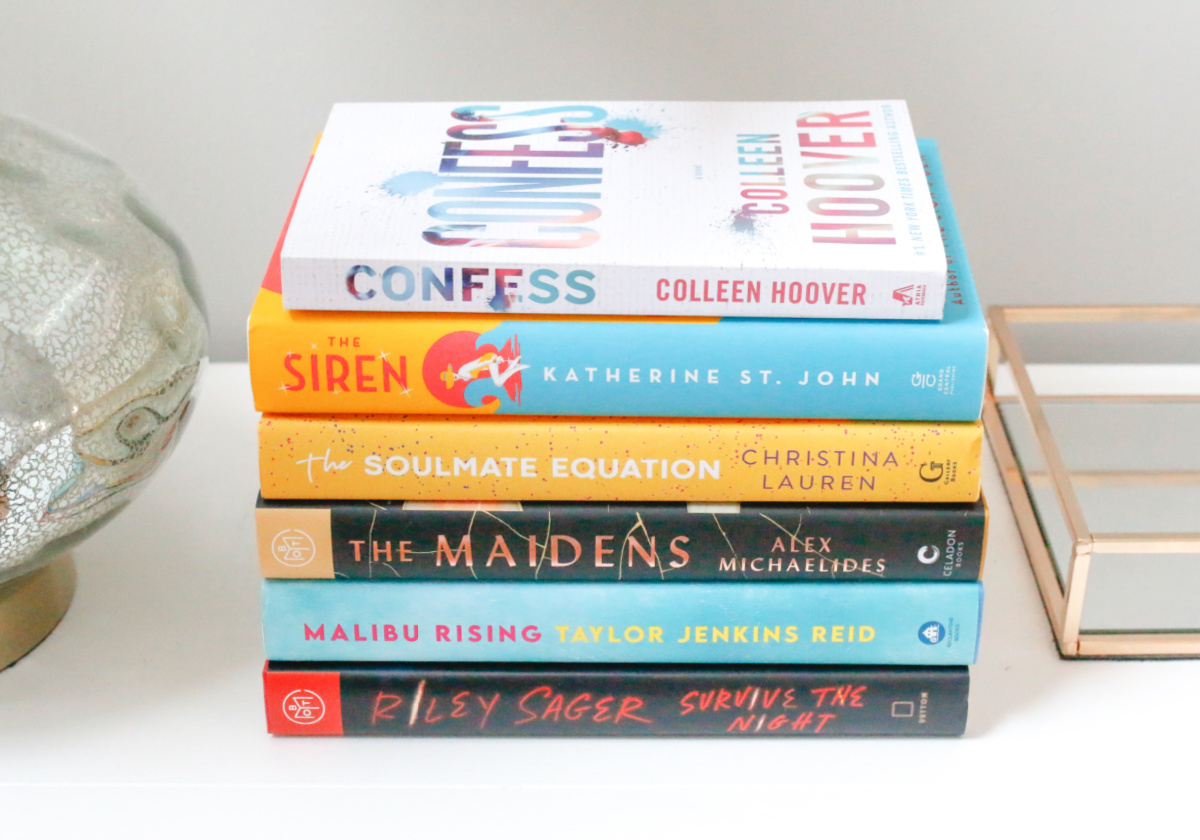 THE SIREN by Katherine St. John | In the midst of a sizzling hot summer, some of Hollywood’s most notorious faces are on the Caribbean island of St. Genesius to film The Siren, starring dangerously handsome megastar Cole Power playing opposite his ex-wife, Stella Rivers. The surefire blockbuster promises to entice audiences with its intimately connected cast. Three very different women arrive on set, each with her own motive. Stella is struggling to reclaim the career she lost in the wake of multiple, very public breakdowns. Taylor is anxious to work on a film she hopes will turn her career around after her last job ended in scandal. And Felicity harbors ideas of her own that threaten to upend everyone’s plans. With a hurricane brewing offshore, each woman finds herself trapped on the island, united against a common enemy. review: Told in three POV, this book is a fast-paced, compulsive drama that’s a mix between a vacation read and a suspense book! I was hooked from the beginning and enjoyed the characters, who all have long-buried secrets and pasts they want to keep hidden. The pacing was fantastic and the character development was great. I really enjoyed the plot line, but the side stories really helped make this book as captivating as it was! I couldn’t put this one down! Would make a great summer read, but there are some trigger warnings. rating: 4 out of 5 ⭐️

MALIBU RISING by Taylor Jenkins Reid | Four famous siblings gather to throw an epic party to celebrate the end of the summer. But over the course of twenty-four hours, their lives will change forever. I have loved Taylor Jenkins Reid’s books for years and she quickly became an an auto-buy author for me, so I immediately pre-ordered this book as soon as I heard about it. The Rivas have a long history on the coast and they make for a vibrant, fascinating family in this new novel. review: I really enjoyed following along with Mick and June’s story as they met and started their family, and later, learning more about each sibling and the intricacies within the Riva family. The family dynamic was portrayed so well and I really felt for June and Nina as they navigated difficult circumstances. This book felt different than many of TJR’s other books and I really enjoyed this character-driven novel. And honestly, I was relieved that I didn’t have to pull out tissues for one of her books! rating: 4 out of 5 ⭐️

THE SOULMATE EQUATION by Christina Lauren | Single mom Jess Davis is a data and statistics wizard, but no amount of number crunching can convince her to step back into the dating world. Jess has been left behind too often to feel comfortable letting anyone in. But then Jess hears about GeneticAlly, a buzzy new DNA-based matchmaking company that’s predicted to change dating forever. When her test results show an unheard-of 98% compatibility with the one person she never would have guessed. But GeneticAlly has a proposition: Get to know him and we’ll pay you. Jess is in no position to turn it down, despite her skepticism about the project and her dislike for her match. As the pair are dragged from one event to the next as the “Diamond” pairing that could make GeneticAlly a mint in stock prices, Jess begins to realize that there might be more to the scientist–and the science behind a soulmate–than she thought. review: The past few books by Christina Lauren have been very hit or miss for me. Some I find myself devouring, while others I feel like they’ve lost their touch. Luckily, The Soulmate Equation was a hit for me. I found the storyline to be really engaging – it was the perfect mix of romance and science. I enjoyed learning a bit more about DNA and the science of matching while reading this book. As for the characters, they were so endearing and I found myself rooting for them the whole time! I love a good enemies to lovers trope and this perfectly fits the bill. I also loved Jess’ BFF Fizzy – she’s the kind of friend everyone needs in their life! If you’re looking for a good romance with a bit of substance, add this one to your list. rating: 4 out of 5 ⭐️

SURVIVE THE NIGHT by Riley Sager | Josh Baxter, the man driving her home, is a virtual stranger to Charlie. They met at the campus ride board, each looking to share the long drive home to Ohio. Both have good reasons for wanting to get away. For Charlie, it’s guilt and grief over the murder of her best friend, who became the third victim of the man known as the Campus Killer. For Josh, it’s to help care for his sick father. Or so he says. There’s something suspicious about Josh from the holes in his story. As they travel an empty highway in the dead of night, an increasingly worried Charlie begins to think she’s sharing a car with the Campus Killer. Is Josh truly dangerous? Or is Charlie’s suspicion merely a figment of her movie-fueled imagination? What follows is a game of cat-and-mouse. review: I always look forward to Riley Sager’s latest book and this one certainly didn’t disappoint! The premise itself, a girl getting into a car with a virtual stranger, is nothing new. However Sager did a fantastic job of setting the scene of the night and making the premise feel fresh and new. There are some chilling moments and plenty of twists throughout the book.This is certainly a bingeworthy summer thriller that will leave you on the edge of your seat. I loved the elements of suspense that this book provided and I’m already looking forward to his next novel. rating: 4.5 out of 5 ⭐️

THE MAIDENS by Alex Michaelides | Edward Fosca is a murderer. Of this Mariana is certain. But Fosca is untouchable. A handsome and charismatic Greek Tragedy professor at Cambridge University, Fosca is adored by staff and students alike—particularly by a secret society of female students known as The Maidens. Mariana Andros is a brilliant but troubled group therapist who becomes fixated on The Maidens when one member, a friend of Mariana’s niece Zoe, is found murdered in Cambridge. She becomes convinced that, despite his alibi, Edward Fosca is guilty of the murder. But why would the professor target one of his students? When another body is found, Mariana’s obsession with proving Fosca’s guilt spirals out of control, threatening to destroy her credibility as well as her closest relationships. But Mariana is determined to stop this killer, even if it costs her everything—including her own life. review: After reading The Silent Patient last year, I was really excited to get my hands on this book. Unfortunately, this one didn’t live up to the hype for me. This was a very slow burn and I often found myself wanting more. I’m not big on greek mythology though, so I felt like a lot of this book was lost on me. One of the biggest things that bothered me was that we were provided with so many details throughout the book, however most of the pieces never really tied together or came to fruition and I was left with more questions than answers. That said, I really like Michaelides writing style and this book certainly had a dark element to it with a few well placed twists. If you’ve had this one on your list – give it a shot! rating: 3 out of 5 ⭐️

CONFESS by Colleen Hoover | At age twenty-one, Auburn Reed has already lost everything important to her. In her fight to rebuild her shattered life, she has her goals in sight and there is no room for mistakes. But when she walks into a Dallas art studio in search of a job, she doesn’t expect to find a deep attraction to the enigmatic artist who works there, Owen Gentry. For once, Auburn takes a chance and puts her heart in control, only to discover that Owen is keeping a major secret from coming out. The magnitude of his past threatens to destroy everything important to Auburn, and the only way to get her life back on track is to cut Owen out of it. To save their relationship, all Owen needs to do is confess. But in this case, the confession could be much more destructive than the actual sin. review: As a big fan of Colleen Hoover, I was surprised that I had this one sitting on my shelf unread for so long! I picked it up earlier this month and devoured it. Something about Hoover’s writing style always creates such an emotional, engaging read.  Confess is a quick, engrossing read told in dual POV from the main characters, Auburn and Owen. The characters were nuanced and flawed, showing there is more than meets the eye with each character you meet throughout the book. I loved the mix of romance and suspense within this book – it provided a little more substance than some of Hoover’s other books. The story of their pasts was really interesting and I loved how it all ended up coming together at the end. This book just goes to show that fate has a way of bringing people together! rating: 4 out of 5 ⭐️

shop the books I read in June & July below